‘It’s kind of embarrassing, like for the team and the city. It’s not fair to have your team represented with a spelling error,’ Heather Prevalnig says about the ‘Winnepeg’ Jets T-shirt she bought. (Heather Prevalnig)

A British Columbia woman who wanted to show her hometown pride with Winnipeg Jets gear was stunned to discover the T-shirt she bought at the Richardson International Airport spelled the city “Winnepeg.”

Heather Prevalnig of Kelowna, B.C., was in Winnipeg to visit family over the weekend.

“In order to represent Winnipeg properly, I should get a Jets shirt.”

She bought the shirt at a gift shop after going through passenger security screening at the Winnipeg airport. 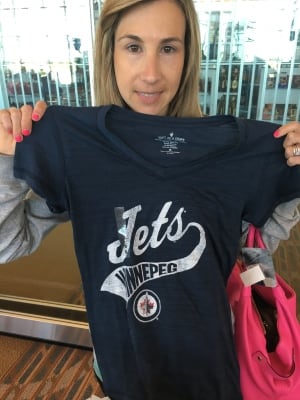 It was folded up and Prevalnig just grabbed the shirt in her size. She didn’t discover the spelling error until later.

“My husband took a picture of me with it and I sent it to my brother and I said, ‘I will represent you proudly.’ Boarded the flight, landed in Calgary and received all these messages from him saying, ‘You do realize that Winnipeg is spelled wrong.’ I just couldn’t believe it,” Prevalnig said.

The shirt appeared to be official NHL product, complete with NHL tags and logos, Prevalnig said.

“It’s kind of embarrassing, like for the team and the city. It’s not fair to have your team represented with a spelling error,” Prevalnig said.

Scott Brown with the Winnipeg Jets called the error disappointing but said mistakes are made, even by manufacturers.

Prevalnig is surprised something with an NHL logo on it would have a spelling error. (Heather Prevalnig)

Prevalnig received a tweet from someone in Thompson saying he purchased a cellphone cover with the same spelling error.

It was a new order of shirts and only a handful were sold, he said.

A spokesperson with the Winnipeg Airports Authority confirmed they are looking into the matter.

Prevalnig said the airport gift shop later called her to offer a refund and tell her the shirts have been recalled by the company that printed them.

As well, the shop told Prevalnig it will send her and her husband new Jets shirts – printed with Winnipeg spelled correctly – free of charge.ÊÊÊ