Two Midwest state universities are being hauled into court over what campus groups can and can’t say on their T-shirts.

The Foundation for Individual Rights in Education said Tuesday that it has filed lawsuits against Iowa State University, for denying marijuana reform advocates the use of the school mascot on their T-shirts, and against Ohio University, for directing a student government-related group not to wear T-shirts with a double entendre. Students from the two schools joined FIRE, a Philadelphia-based nonprofit, at a press conference in Washington, D.C., announcing the suits.

FIRE also said it was suing Citrus College in California over a “minuscule” free speech zone and Chicago State University for alleged censorship of a faculty blog. The four lawsuits begin FIRE’s Stand Up For Speech Litigation Project, an effort to challenge college speech codes nationwide.

“The lawsuits will continue until campuses understand that time is finally up for unconstitutional speech codes in academia,” said FIRE President Greg Lukianoff.

Members of Students Defending Students, a subsidiary of the Ohio University student Senate that advises students using the school’s judiciary process, were told not to wear T-shirts that read, “We get you off for free.” The university told the group that the shirts objectified women, according to FIRE’s suit, and violated the university’s student conduct policy, which forbids any “act that degrades, demeans, or disgraces” another student. 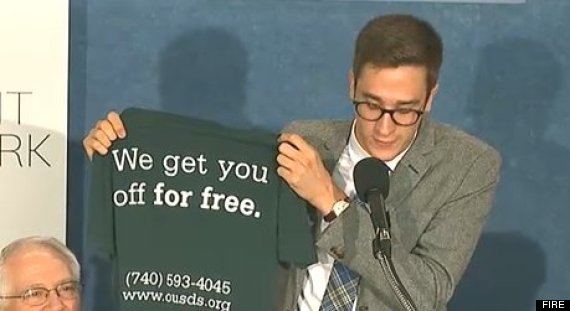 Isaac Smith, an Ohio University senior (seen above), admitted at the press conference that the shirts were silly and a bit inappropriate, “but that’s the point.”

The Iowa State chapter of the National Organization for the Reform of Marijuana Laws was barred from using the school mascot, Cy the Cardinal, on T-shirts promoting its campus club. 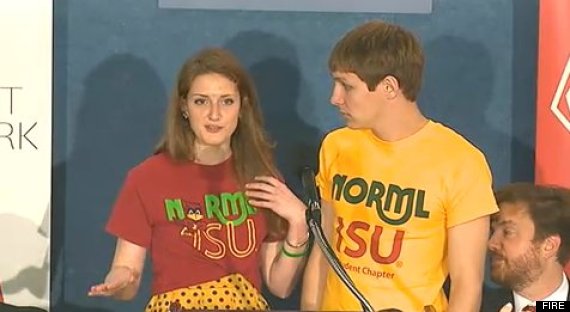 The shirt on the left (above) is the one that the school’s trademark licensing office initially approved in 2012, but rejected the following year after a photo of the shirt appeared in the state’s largest newspaper. A January 2013 update to the trademark policy banned use of the mascot in designs that tend to promote “dangerous, illegal or unhealthy products, actions or behaviors” and “drugs and drug paraphernalia that are illegal or unhealthful,” according to the Iowa State Daily. The NORML chapter began working with FIRE earlier this year.

“Our university administration has prevented us from even putting the word marijuana on our designs,” said Erin Furleigh, a member of the NORML chapter, at the press conference.

Iowa State has continued to reject design submissions from the group featuring the Cy logo and a cannabis leaf.

University spokesman John McCarroll said Iowa State had not yet seen the lawsuit and couldn’t comment on specifics.

“After we receive the lawsuit, we will review it with the Iowa Attorney General’s Office and file our response with the court,” McCarroll said. “Student organizations at Iowa State University have the right to express their views, but they can’t attribute those views to the university. Iowa State has the right and obligation to manage the use of our university trademarks.”

Ohio University representatives did not respond to a request for comment.

Ohio University just became aware of the lawsuit filed today and we are currently reviewing the lawsuit and the allegations. We want to be clear that Ohio University administrators never directed the students or the student organization to not wear the t-shirts mentioned in the lawsuit, and no student misconduct action was ever threatened or taken.

As educators, we respect freedom of speech and expression as core values at Ohio University. We also believe that an important part of the educational process is to hold discussions and present other points of view. Such a discussion occurred when administrators suggested to the student organization that the t-shirts might inhibit their efforts to serve other students. University administrators were exercising their responsibilities as educators when they pointed out to the student organization how their actions might be viewed by others.

Our Student Code of Conduct explicitly states that, ‘The Ohio University community is an open forum involving the free exchange of ideas and opinions. For exchange to occur there must be a continuous acceptance of freedom of ideas and expression and civility in disagreement.’ We believe our conversations represented civility in disagreement and that the University administrators acted properly as responsible educators in their handling of this situation.