By James Schmehl | jschmehl@mlive.com from mlive.com 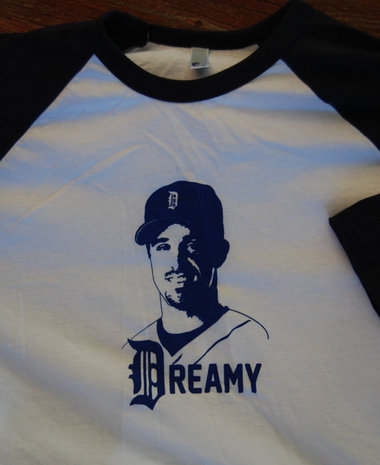 The customized ‘Dreamy’ T-shirts can be purchased at bigwaterapparel.com. Courtesy of Big Water Apparel

DETROIT — Alex Avila seems to have plenty of free time on his hands nowadays since being placed on the 15-day disabled list earlier this month.

And Tigers manager Brad Ausmus has an idea how the injured catcher has been spending some of it.

Nearly every Tigers player was gifted a T-shirt Wednesday with Ausmus’ face plastered on it, along with the word “Dreamy,” spelled with an Olde English D.

The shirt, which plays off an Internet meme, is meant to poke fun at Ausmus, who is widely viewed as being one of the most handsome managers in baseball.

A handful of Tigers players have been spotted wearing the shirt in the clubhouse, including shortstop Jose Iglesias, who had no idea how the shirt wound up in his locker.

As of Thursday afternoon, no one has claimed responsibility for ordering the T-shirts, and it remains unclear how the shirts, made by Big Water Apparel, made their way into the team’s clubhouse.

“I think it was Alex. That’s my guess,” Ausmus said. “He has free time. He boldly walked into the room wearing it in front of me. So I assume that’s his way of bragging.”

Tigers reliever Joba Chamberlain, the mastermind behind last year’s Zubaz craze, denied involvement Thursday. As did Tigers hitting coach Wally Joyner, who was initially believed to have ordered the shirts.

“I’ve got a feeling,” he said. “But I really didn’t do an investigation into it. I wasn’t overly concerned.”

The customized shirts can be purchased at bigwaterapparel.com.

When asked if his wife, Liz Ausmus, has expressed any interest in purchasing the T-shirt, Ausmus said she saw the T-shirts Tuesday, but hasn’t ordered one.

“Hers wouldn’t say ‘Dreamy,’ it would say nightmare,” he joked.

And what about himself? Would Ausmus be spotted wearing a “Dreamy” T-shirt?

“If it starts a winning streak, I’ll wear one,” he said.