Can American Apparel Afford to Keep Making Clothes in the U.S.?

BY ANNA HEYWARD from newyorker.com 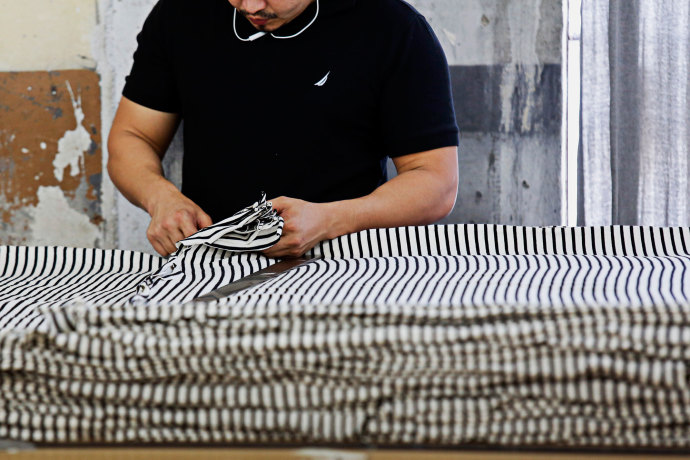 An employee at the American Apparel factory in downtown Los Angeles, in February.
CREDIT PHOTOGRAPH BY PATRICK T. FALLON/BLOOMBERG VIA GETTY
Paula Schneider, the new C.E.O. of American Apparel, the largest apparel manufacturer in the United States, is in a difficult position. The company is carrying hundreds of millions of dollars in debt, and its stock price and sales are dropping. A July 6th S.E.C. filing by the company describes ”a host of legacy issues,” notably the ”approximately 20 lawsuits and administrative actions initiated by Company founder Dov Charney and his associates.” Charney was fired ”for cause” last December, after being suspended in the wake of sexual-misconduct allegations. At the time, the company had already lost more than three hundred million dollars in five years, and hadn’t turned a profit since 2009. This year, in the first quarter of 2015, net sales decreased nine per cent compared with the same period the year before, despite a massive sale during which, Schneider told Apparel News, a million pieces ”flew out the door.”

Charney raised American Apparel to prominence by marketing a liberal worldview that combined sex appeal with a made-in-America ethos that derived from the fact that, since the nineteen-nineties, almost all of the company’s wares have been produced in a factory in Los Angeles by an almost entirely Hispanic workforce. Since taking over as C.E.O., in January, Schneider has concentrated on fundamentals, speaking in interviews about wanting to increase sales, particularly online-and by streamlining the company’s inventory to jettison unpopular styles, closing the most inefficient of its two hundred and forty or so locations, and opening new stores in more attractive places. With respect to the company’s image, she has emphasized her intention to make the brand less sexualized; she has also said that the sweatshop-free model is integral and will be preserved. So far, though, the more significant action that the company has taken since Schneider became C.E.O. has been to reduce its workforce. In April, American Apparel laid off about a hundred and eighty workers, most of them in production. In early July, more cuts were announced, most of them reportedly in administration and retail. These layoffs raise a question, the implications of which go beyond American Apparel: Can a mass-market fashion company compete with brands that can sell similar products at lower prices by relying on cheap offshore labor?
Currently, ninety-seven per cent of the apparel sold in the U.S. is made in overseas factories, where workers are frequently paid extremely low wages and often toil in dangerous conditions. Much of the remaining three per cent of clothing is part of the ”luxury goods” market. A great deal has been written about the luxury sector’s dependence on exclusivity and marketing, yet it is also marked by skilled and properly paid production (though, of course, many brands identified and priced as luxury also use sweatshop labor). The label The Row, for example, which produces at least some of its wares at the InStyle factory, in New York City’s garment district, charges more than six hundred dollars for a pair of trousers. Raleigh Denim, a small company that produces its clothes in North Carolina, charges between a hundred and seventy-six dollars and three hundred and eighty-five dollars for a pair of trousers. By comparison, American Apparel’s prices look remarkably ambitious-the company charges just forty-eight dollars for its Rayon Challis Brunch Pant, while its jeans retail for between seventy-four and a hundred and forty dollars.

At those price points, American Apparel is competing with chains like Uniqlo, Gap, and H&M, who outsource their production to Bangladesh, China, Vietnam, and other countries with poor labor records. H&M charges $5.95 for a basic men’s T-shirt, while American Apparel charges sixteen dollars. To put this price difference into context, in 2005 the Institute for Global Labour and Human Rights estimated the cost of a long-sleeved shirt made in Bangladesh to be $4.70, of which $0.22 was labor costs and $3.30 went toward materials. The figures are similar for Southeast Asia. The cost in the U.S. was $13.22, with roughly five dollars for raw material and $7.47 for labor. When confronted with evidence of poor production conditions (such as wage cheating, excessive hours, poor ventilation, and overcrowding), it has become common for fashion retailers to proclaim ignorance owing to their outsourcing of management and facilities. American Apparel, meanwhile, boasts about its vertical integration, and about executives and production crews who work in the same building complex.

Janice H. Hammond, the Jesse Philips Professor of Manufacturing at Harvard Business School, told me that under the right circumstances, the company’s approach should still be viable, but it must manage a delicate alchemy of simple production methods and changing fashion trends. American Apparel could be profitable while making clothes in the U.S., Hammond said, ”if they focus primarily on lower labor-cost items, or if they are focused on extremely trendy items and have incredibly low lead times.” U.S. production theoretically allows the company to decrease shipping times, thereby getting new styles into stores faster; Hammond added that being able to respond to trends quickly provides the strongest economic incentive for the company to continue making clothes in the U.S., because it minimizes the need to mark down prices, which hurts profit margins. For this to work, however, the company needs to be able to make fast decisions about what to make-and then to produce and distribute its products quickly. And indeed, Schneider has emphasized in recent months that producing in the U.S. should allow stores to quickly and precisely stock fast-selling styles. She has called the company’s old model, in which it maintained many lines and kept a great deal of stock in its stores in an attempt to market garments as broadly as possible, as a problem.
Over the past several years, though, declining sales have made it difficult to keep production costs in line with revenues, and the company appears to see downscaling of production as part of the solution, at least in the short term. This is suggested not only by the ongoing layoffs, but by reported changes to staffing procedures. In March, Hermandad Mexicana, an association that advocates on behalf of American Apparel production workers, wrote a letter to the company’s board. ”The ‘sweatshop free’ business model is in jeopardy of being eliminated given the current rate of deterioration of wages, hours, and working conditions experienced by the American Apparel workforce. Garment employees are working as little as 2 or 3 days per week, and many are experiencing rotating full week lay-offs for the first time in their tenure with American Apparel,” it said.

Nativo Lopez, of Hermandad Mexicana, told me that while management says that twelve dollars an hour is the average rate for workers, the real average has dropped closer to nine dollars an hour, as employees are being given less material to produce and told to avoid accelerating production, thereby eliminating their usual production bonuses. A production worker named Piedad Torres told the Los Angeles Times earlier this month that she now earns half as much as she did a year ago. (American Apparel declined to comment on Hermandad Mexicana’s assertions for this article, but did, according to the L.A. Times, circulate a letter to employees that referred to ”false accusations” made by the organization.)

I asked Lopez how American Apparel might increase its sales, given that its products can be double the price of those made by competitors. His answer spoke to consumer habits. Buying something made in the U.S., he replied, ”is now a political choice.” Hammond, the Harvard business professor, told me much the same thing. ”In order to truly generate momentum away from the sweatshop model, people in the U.S. could start to consider factors other than price when they make purchases,” she said. This change might not come easily: the move to overseas labor during the sweatshop boom of the nineteen-nineties has meant that U.S. apparel consumers are now accustomed to paying very low prices for very large amounts of clothes. Today, typical Americans buy about sixty-eight items a year, paying 3.5 per cent of their household budget, on average, compared with 1960, when average Americans bought twenty-five garments a year using ten per cent of their budget.

Were American Apparel to fail, or to move production overseas alongside its competitors, it could be taken as further evidence of the impracticability of manufacturing apparel in countries with strong labor laws. The company’s initial successes made the sweatshop-free model seem possible, and even desirable-American Apparel succeeded by marketing not just sex and sly nonchalance, but real political activism about immigration, labor, and social rights. This pitch appears to be working in the food industry right now, with newcomers like Shake Shack and Chipotle putting pressure on long-time titans, such as McDonald’s and Subway, by telling the story of their supply chains in their marketing. The challenge for American Apparel will be no less great: they will, once again, have to succeed in convincing fashion consumers that there can be value in paying a bit more for a bit less.ÊÊÊ