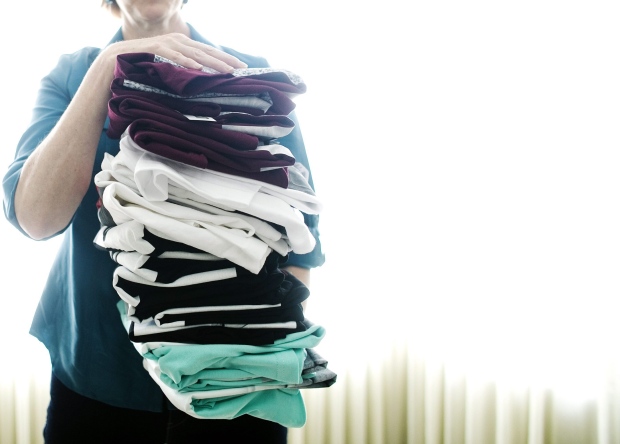 Judy Cox stands for a photograph holding a stack of T-shirts with what she believes are pornographic designs Monday, Feb. 17, 2014, in Orem, Utah. (AP / The Daily Herald, Mark Johnston)

OREM, Utah — A conservative Utah city that decided it likely would lose a legal battle over a national clothing store’s “offensive” mall display of T-shirts has instead sent the company a scathing letter.

The letter from city officials in Orem, about 40 miles south of Salt Lake City, was a show of support for a mother who was so upset about the shirts at a local PacSun store that she bought them all to remove them from a window display. The T-shirts featured pictures of scantily dressed models in provocative poses.

Judy Cox then filed a complaint with the city saying the shirts violated city code, which prohibits “explicit sexual material” on public display.

But city officials later said they would not take legal action. They cited rulings in similar court cases that such displays are legal.

Instead, Orem’s mayor and most of its City Council sent a letter Tuesday asking PacSun to refrain from putting up similar displays and saying they wanted to personally register their “disapproval of this type of offensive display” that could be seen by children, the Daily-Herald of Provo reported.

The lone councilman who decided not to sign the letter, Brent Sumner, said he agrees the T-shirts were inappropriate but opposes government telling companies how to run their businesses.

Officials with the chain store PacSun, which sells beach clothes for teens and young adults, were not immediately available for comment.

Orem, in ultraconservative Utah County, has a population of about 90,000. Most residents belong to The Church of Jesus Christ of Latter-day Saints, which frowns on pornography and encourages its youth to dress and act modestly.

Cox spotted the T-shirt window display in February while shopping with her 18-year-old son at the University Mall.

She complained to a store manager and was told the T-shirts couldn’t be taken down without approval from the corporate office. She then bought all 19 T-shirts in stock, for a total of $567. She plans to return them later, toward the end of the store’s 60-day return period.

Cox thanked city leaders for supporting her cause, the Daily-Herald reported.

“This is not an issue of what is available for adult purchase, rather of a corporation marketing and profiting from sexually enticing and explicit material to minors,” she said.

The Associated Press from ctvnews.ca