The Bible famously recounts a moment when Jesus Christ turns water into wine during a wedding he, his mother and his apostles attend at Cana, in Galilee. He asks servants to fetch six great stone water jars andÊ to fill them. When they carry the jars to the host’s table, he is surprised to taste not water, but wine. Jesus goes onto perform another 36 miracles before his death.

Good taste suggests leaving the idea of drinking and Jesus here. But that hasn’t stopped Urban Outfitters from dreaming up its latest creation.

For St. Patrick’s Day, Urban is selling a green T-shirt with an image of a young guy with a full mug of beer. He’s bearded with shaggy hair and what look like rays of sunlight radiate around him. It is unquestionably Jesus Christ holding up that brew with a cheery smile. And if there’s any doubt about His identity, Urban included this catchy slogan next to the T-shirt’s picture on its website: ”Throw some back with the holy man himself in this epic tee!” 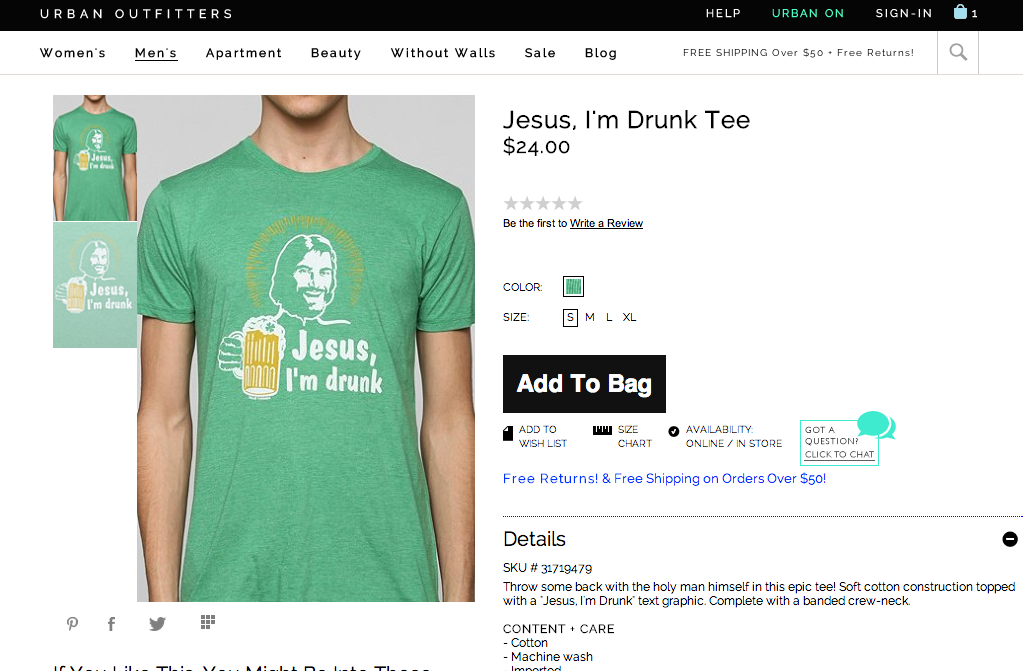 This wasn’t the first time Urban has seemed implausibly tone-deaf over St. Patrick’s Day. Back in 2012, among other items, it sold a trucker-style hat with the image of a green-stick figure vomiting shamrocks as well as a jug with the phrase ”Leprechaun’s Piss.” The goods prompted a stern word from the Ancient Order of Hibernians: ”There are those few who use this day as an excuse to over celebrate but that does not give you or anyone else the right to defame and debase a whole race of people by selling the garbage that you display in your stores.”

The AOH has yet to say anything about this year’s shirt. (It’s been busying decrying the St. Patrick’s Day garb at Spencer’s.) Nevertheless, IrishCentral.com, a blog about all things Irish-American, has picked up on the shirt. And one man, Andrew Coleman, of Chicago, emailed Forbes to express his disappointment over the Jesus shirt. ”In am HIGHLYÊ insulted at what this company will do to sell a product!” He writes. ”I am not a prude, and like a beer myself, but this is unacceptable.”

An email to an Urban spokeswoman about the thinking behind the latest shirt has not been returned. The company is owned by billionaire Richard Hayne. He started the company in 1970 and returned to the CEO role in 2012 after a stretch of disappointing sales. Hayne imbued Urban with a hippy vibe it still carefully maintains, and he hasn’t been afraid of controversy.

Now aside from the Irish, Urban has also managed to offend Jews (thanks to a T-shirt with what looked like a Nazi emblem); Blacks (with Ghettopoloy, a boardgame replacing Boardwalk with Cheap Trick Avenue); and Native Americans (by infringing on patents for the word ”Navajo”). Just earlier this year, it irked millions more with its slim, gray v-necked women’s shirt with ”Eat Less” emblazoned on it.

Today it’s drunk Jesus-now imagine what Urban could do with Easter. It’d probably take a miracle to convince Urban it was a bad idea.