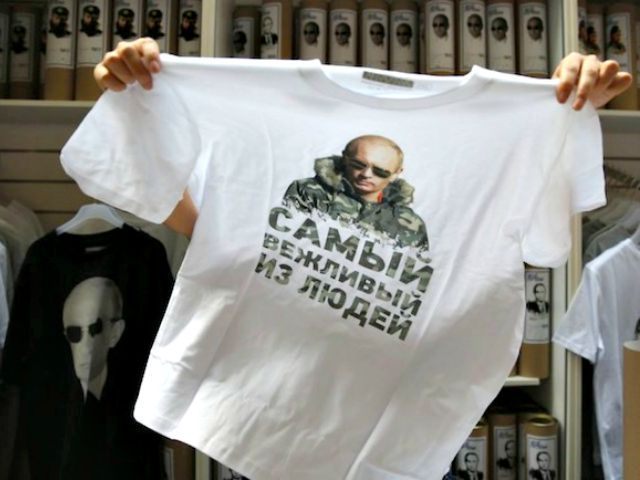 by MARY CHASTAIN from breitbart.com

Ukrainian officials fired Levent AydÌã±n, the honorary consul of Ukraine in Turkey, after he appeared at an event in a t-shirt bearing a picture of Russian President Vladimir Putin.

”Levent AydÌã±n has helped many Ukrainian citizens, but this is a matter of principle,” stated Ukrainian Foreign Minister Pavlo Klimkin. ”I have decided to dismiss him from the position of honorary consul of Ukraine.”

AydÌã±n, a businessman in Antalya, wore the t-shirt to a signing ceremony of soccer star Samuel Eto-o. The t-shirt says ”Politeness is everything for us,” which alludes to the green men who swarmed Crimea before Moscow annexed the peninsula from Ukraine. Crimeans called these men ”polite people.”

In June 2014, a popup store appeared in a GUM department store in Moscow to sell t-shirts and merchandise with Putin’s face on them to celebrate his many exceptional victories. The store popped up again two months later. Actor Mickey Rourke and Russians stood in line for two hours to purchase the items.

”If I didn’t like him, I wouldn’t buy the T-Shirt,” Rourke said. ”I have met Putin a couple of times. He is a real gentleman, very cool, a regular guy. I have a Russian girlfriend, you know, that’s all I care about. Her father is a good person, her mother is great, her babushka is wonderful. To me it is all about family, I don’t give a fuck about politics.”