By Alan Stamm astamm@comcast.net from deadlinedetroit.com
Canadian civility distinguishes a lengthy online discussion of our article about a dispute between startup garment makers in Michigan and Ontario.

At a Toronto forum on Reddit, we link to Wednesday’s report on Detroit designer Tommey Walker Jr.’s effort to defend “his valuable trademark rights,” as a lawyer puts it, to the Detroit vs Everybody idea and graphic style. The 29-year-old Detroiter challenges Toronto vs Everybody T-shirts, tanks and sweats from the Peace Collective, a year-old firm in that city.

“They’re aware it’s our trademark,” Walker said in a phone interview this week. “I did not allow them to use the brand. . . . I don’t understand how they can do that. They’re not giving me any credit. They act like they came up with it.”

The lively Reddit thread, with 90 comments and rising, has a few Detroit voices.

Some posts criticize Walker (“a crappy design”), while others take his side: “It’s a huge ripoff and that’s a shame.”

Detroit also gets slapped a bit (“great city if you like murder”) and staunchly defended: “I love to visit the place whenever I can.”

A handful of comments take aim at Deadline: “This shouldn’t be a story.”

Below are highlights without the screen names commenters use. (This writer participated transparently by real name. My comments aren’t here.)

Ì¢ÛÒ¼ I love Detroit and have spent vacations there and will again in the future.

Ì¢ÛÒ¼ I know about a dozen people or so who have moved there and they are all happier for it. And every time I’ve been there I’ve had a great time. There’s obviously neighbourhoods/sections of the city you wouldn’t want to walk around alone, but it’s a lot less scary now than it was in the late ’80s/’90s. If my fiancÌ©e hadn’t just been denied her U.S. citizenship, we’d probably move there.

Ì¢ÛÒ¼ Detroit has a ton of potential and already has some pretty incredible things going on. I love to visit the place whenever I can.

Ì¢ÛÒ¼ Yup. It’s a great city with so much exciting stuff happening and so much potential. Hopefully it can shed its “step foot in it and die” image.

Ì¢ÛÒ¼ The people have Detroit have really come together to help evolve their city. There’s so many grassroots initiatives happening down there right now it’s truly amazing.

Ì¢ÛÒ¼ I don’t think of high crime. I just think of abandonment

Ì¢ÛÒ¼ People in Detroit are often trapped in their city. They would leave if they could.

Ì¢ÛÒ¼ I moved 500 miles to Detroit, voluntarily, and fucking love my city. I’ll be happy to point you in the direction of tens of thousands of others who have done the same. Or, if you prefer, you can head into the neighborhoods full of people who will have stern words for you if you ask if they’d like to leave Detroit if they had more money. 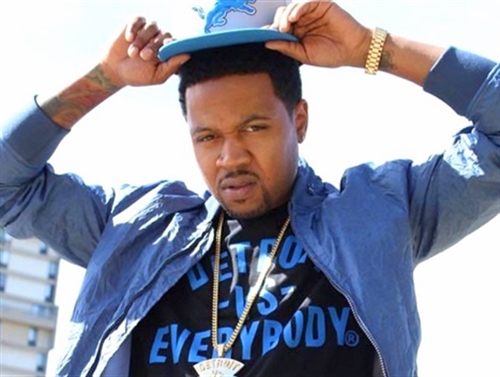 Ì¢ÛÒ¼ I wouldn’t wear this ripoff of a crappy design.

Ì¢ÛÒ¼ Not a knockoff at all. They legally have registered trademark in Canada for this. Peace Collective didn’t copy or do anything wrong. . . . I’m proud to wear their stuff. They’re good peoples.

Ì¢ÛÒ¼ I’m not a copyright lawyer, but if he didn’t get a Canadian trademark and Peace Collective did, then he has no basis for suing in Canada, no? Also, I think you could argue that this phrase is way too commonly used, and broad to be trademarked. Same way the “I Ì¢ã¢´ NYC” shirts have about every variation possible.

Ì¢ÛÒ¼ This isn’t a case of piracy. You can’t trademark a design, only a word or phrase. He did not, nor ever plan to trademark “Toronto vs Everybody”.

Ì¢ÛÒ¼ He’s trying to shame them, and since that probably won’t work, he’s trying to get a bit more publicity.

Ì¢ÛÒ¼ This isn’t the first time I’ve seen [a] “vs everybody” or “vs something” slogan. Seen it countless times, done by many different people.

Ì¢ÛÒ¼ Some words on a T-shirt do not a designer make.

Ì¢ÛÒ¼ I wish I knew picking a font and typing some words is all it takes to be a designer. It would have spared me all that student loan debt.

Ì¢ÛÒ¼ This guy never planned to sell “Toronto vs Everybody” anyways. . . . There are obviously many people in his own country that he can easily sue. [With links to shirts saying Chicago vs Everybody, Boston vs Everyone and Los Angeles vs Everybody.]

Ì¢ÛÒ¼ This isn’t a case of piracy. You can’t trademark a design, only a word or phrase. He did not . . . plan to trademark “Toronto vs Everybody.”

Ì¢ÛÒ¼ Nothing has been stolen or pirated. Walker styles himself to be an entrepreneur. That doesn’t mean he can just make up laws and believe [they] will be enforced in another country.

Ì¢ÛÒ¼ Tough shit. That is what you get for cheaping out on your trademark applications. He doesn’t own the trademark in Canada, period. And even if he thinks he did, the amount of money that he’s going to spend to enforce is laughably more than a T-shirt brand will make unless it is massively licensed.

Ì¢ÛÒ¼ Doesn’t even really make sense. Detroit vs Everybody sure makes sense since Detroit has the reputation of being a down-and-out place. Backs against the wall and all that; being an underdog and something to have pride about. Toronto vs Everybody I don’t get. Now if it were Toronto vs Canada, sure, since the rest of Canada thinks we’re smug as fuck and better than the rest of the country.

Ì¢ÛÒ¼ I agree with you. Everybody has written off Detroit, so it makes sense. People that live in Detroit have so much pride in their city and seeing it survive and doing what it takes.

Ì¢ÛÒ¼ I’m disappointed that the Toronto version ever took off. There’s a lot of cool and original Toronto designs out there.

Ì¢ÛÒ¼ Toronto does like to steal its designs. Like that “new” Raptors logo that appeared suddenly after the Brooklyn Nets redesign.

Ì¢ÛÒ¼ If it makes Canadians think you have the actual virtue of being “vs Everybody,” then I sincerely pity you for not understanding what that term actually means. . . . Your city would be horrified to have even 1/8 of the bad things that have happened to Detroit. This trademark, while legal in Canada, truly is a sad and unreal theft of the pride that Detroit has of itself. To persevere. To fight the good fight. To withstand theft from a city near our own border. . . . Your city should be ashamed of trying to cash in on the true tenacity that a city like Detroit has. 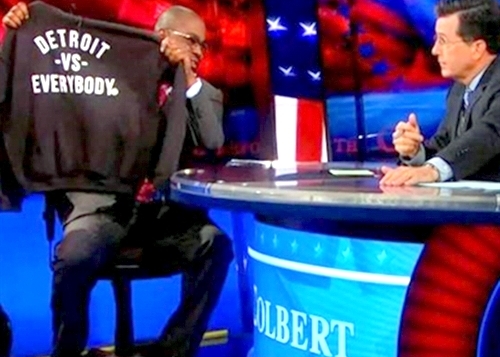 Ì¢ÛÒ¼ What ever happened to originality?

Ì¢ÛÒ¼ It’s a huge ripoff and that’s a shame.

Ì¢ÛÒ¼ Regardless of what anyone thinks of Detroit, it’s a blatant knockoff. Like Toronto needs more reasons for the rest of the sports world to hate us.

Ì¢ÛÒ¼ Even if he has no legal recourse, I think he has the right to call out those who have copied his art for commercial purposes.

Ì¢ÛÒ¼ Just because something is legal (or widespread) doesn’t mean that it’s ok.

Ì¢ÛÒ¼ Something being commonly used doesn’t stop it from being trademarked or copyrighted. Can you believe Taylor Swift was able to trademark “This sick beat”?

Ì¢ÛÒ¼ The I Ì¢ã¢´ NY people regularly issue cease and desist notices for things that are even suggestive of their trademark.

Ì¢ÛÒ¼ Also, Harley Davidson patented their sound. You pay enough money, you can get anything done.

Ì¢ÛÒ¼ This shouldn’t be a story. He messed up, learned a tough business lesson and it should be left at that.

Ì¢ÛÒ¼ Peace Collective has the slogan trademarked and copyrighted in Canada. Do you think it’s unfair that you keep calling it a knockoff?

Ì¢ÛÒ¼ Why are you defending your blog post so vigorously? You stated the facts, people have varying opinions. Insecure much?

Ì¢ÛÒ¼ I thought a big no-no of this subreddit was not to give clicks to journalists or bloggers who are submitting their own work? Why is this still here?