THE STORY BEHIND THOSE UBIQUITOUS DETROIT VS. EVERYBODY T-SHIRTS 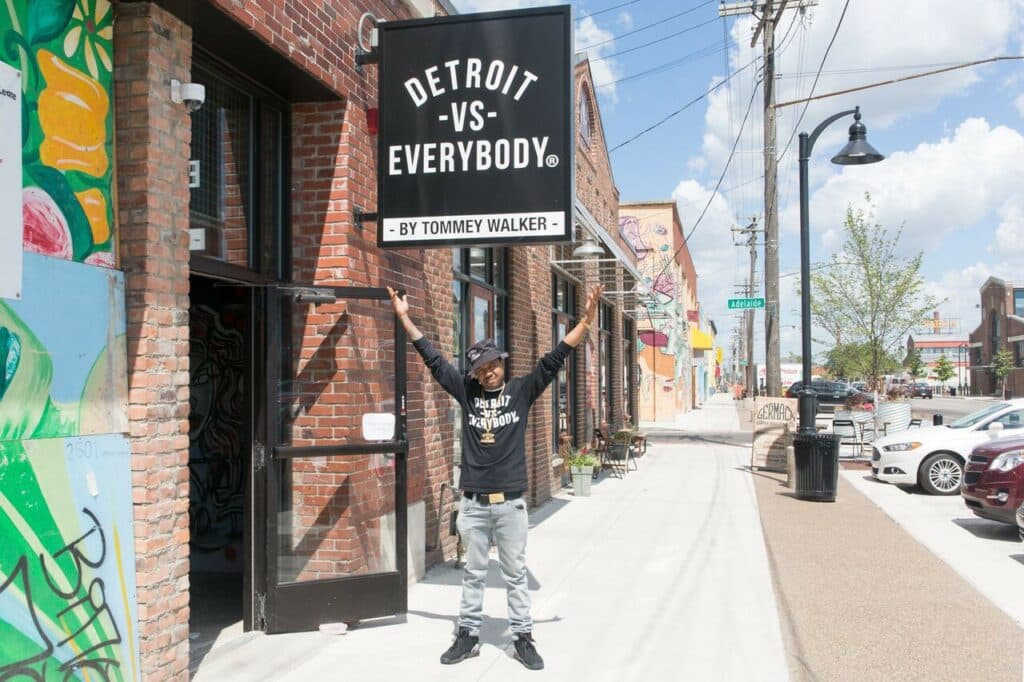 By Lee DeVito @leedevito from metrotimes.com
Photo by Alyson Williams

In a city that has seen no shortage of Detroit pride T-shirts, perhaps none has attained the cultural cachet of Detroit vs. Everybody. The instantly iconic brand got a huge co-sign when Eminem adopted it as the title of a track he dropped last year. The shirts are now ubiquitous on both sides of Eight Mile, and apparel featuring the slogan has been repped by guests on the likes of American Idol, The Colbert Report, ESPN, and Nickelodeon.

“I’m a product of Detroit. I’ve been here my entire life,” creator Tommey Walker tells us by phone. A graphic designer by trade, Walker says the idea for the slogan came at the tail end of the Kwame Kilpatrick saga, when the national media was seemingly obsessed with Detroit’s downfall. “One of the things my mom used to say was not to complain, but to contribute,” he says. “So I wanted to see what I could do and bring some change.”

Walker established the brand in 2012, opening a Greektown boutique. Once the shirts started taking off he was able to expand to a much larger Eastern Market location, which officially opened its doors for business late last month. Located on Eastern Market’s main Russell Street drag, graffiti-style paintings lead shoppers into the basement store, which is outfitted with handsome hardwood floors and plenty of space to display its wares.

If imitation is in fact flattery, Walker should find at least some solace amid the bootlegs and rip-offs currently on parade. Locally, “Detroit Against the World” shirts have cropped up. In Memphis, the Grizzlies have adopted “Memphis vs. Errrbody.”

“I’ve seen so many terrible knockoffs! It’s frustrating,” Walker says. “We have some some legal situations going on with all of that.”

But Walker says he has his own plans for expansion, noting the brand is actually “vs. Everybody.” His Eastern Market store features the slogan adapted to messages like “Everybody vs. Racism” and “Everybody vs. Cancer.” He also says he plans on branching off into the Los Angeles, New York, and Washington, D.C., markets with localized products by winter.