THE RISE OF VINTAGE RAP TEES: ONE COLLECTOR ON HIS ’90S OBSESSION 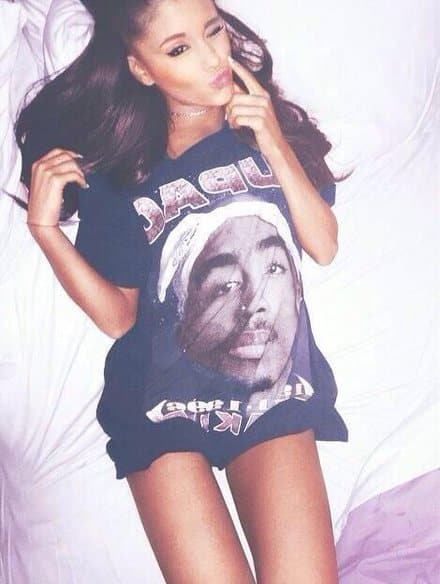 T-shirts printed the gorgeous scowl of Tupac Shakur were ubiquitous when I was in middle school, but the only one I’ve ever wanted popped up about a decade and a half after his passing. It features a shot from the infamous ”Becoming Clean” photo shoot with David LaChapelle, 2Pac lying naked in a bathtub save for heaps of gold jewelry covering his private parts. Above the image is his name in multicolored bubble letters, while below, the title of his most well-received studio album, All Eyez on Me, rings out in the same font. The shirt was listed on eBay, in accordance with its scarcity, at $150 plus shipping, and you can be sure that when it sold closer to the time of its creation (for a far more modest number), neither Shakur nor LaChapelle saw dollar one.

The shirt was a bootleg, printed most likely by some ’90s street hustler who would have sold it from a duffel bag full of them right outside of a 2Pac concert. T-shirts like this one, splashed with hip-hop or R&B artists whose stars have faded, either by way of death or diminished musical output, have become increasingly more in demand with each passing year. They seemed to have stopped being manufactured altogether in the early 2000s, but if DJ Ross One, author of the recently released Rap Tees: A Collection of Hip Hop T-Shirts 1980-1999, is to be believed, hip-hop tees both authentic and less than were never, ever easy to find.

”To put on a hip-hop T-shirt in the ’80s and ’90s was to announce that you had done enough work to receive a shirt,” writes the collector and historian. The book spans the period of 1980 to 1999, featuring pictures of the author’s holiest grails, only a portion of which are even his own. Though the aforementioned 2Pac/LaChapelle bootleg is not included in Rap Tees, its pages are full of designs that coincide with all of the rapper’s major singles, as well as an eye-catching selection of shirts celebrating the hip-hop chart dominance of Master P’s No Limit Records in the late ’90s and a particularly rare Eric B and Rakim tee from their Paid In Full tour in 1987. ”While rap albums were on the shelves of record stores across the country, the corresponding shirts were primarily sold in limited numbers at concerts or given away as promotional items, making them sacred objects for collectors of rap memorabilia,” Ross One writes.

Collector is a term I acknowledge with some reluctance. I own more than my fair share of ’90s-era hip-hop and R&B tees and, by extension of the same nostalgia, some of the very garments the artists I grew up worshipping wore during their respective peaks, but I know collectors to be dedicated and endlessly informed. I just like how these shirts look. I enjoy their very particular aesthetic and, no less important, the alliances they concede. Bootleg hip-hop tees from the ’90s, regardless of the artist, all look like they could have been designed through the same app. They are always printed on black T-shirt bodies, always a sloppily arranged collage of magazine and promo photos, and always overwrought with big, bright script ringing out in primary and secondary colors. The rarer of these shirts, those from the era of the Notorious B.I.G. and 2Pac, or featuring lost R&B superstars like TLC or Aaliyah, are priced today into the low triple figures by sellers. They are one of the hallmarks of renowned vintage dealers like New York City’s Brian Procell or L.A.’s Kirk Tilton (both contributors to Rap Tees).

Up until a few years ago, the entirety of the band tees I would see styled fashionably were from rock bands exclusively. I love the look of Metallica and Iron Maiden tees as much as anyone, but I didn’t and do not actively listen to those bands, and I need something that represents me. The band T-shirt was, and always will be, an integral part of adolescent fashion and a formal declaration of musical taste, and that flag bearing hasn’t left me. I want to honor Nas and Wu-Tang Clan the same way people do Def Leppard and the Grateful Dead: by wearing the seams out of shirts with their names on them.