THE RETURN OF THE GRAPHIC T-SHIRT The Return of the Graphic T-Shirt

Cheap to make, easy to wear and hard to ignore, graphic t-shirts are among the hardest working items for cult brands and retailers.

BY HETTIE JUDAH from businessoffashion.com

LONDON, United Kingdom – Funny, obscene, obscure, retro, rebellious, puerile or tribal – often broadcasting fandom, in-jokes or subcultural affiliation – the humble graphic t-shirt punches far above its weight. For labels, it’s a high volume product with a healthy margin that requires no specialist manufacturing. For consumers, it can be an accessibly priced entry point to an aspirational brand.

In the last decade or so, the over-licensing of graphics linked to cultural lodestars – from The Ramones to Star Wars – and the logo-heavy product of teen retailers like Abercrombie & Fitch have helped drive the graphic t-shirt out of fashion. But, now, retailers, distributors and brands at the trend-sensitive edge are reporting a resurgence of interest in t-shirts, specifically for smaller and hard-to-find labels.

Craig Ford, director of menswear retailer and distribution company A Number of Names* (anon*), estimates graphic t-shirts represent some 35 percent of his business, which he admitted is ”some would say too much.” At anon*’s recently opened store on London’s Upper James Street, men’s logo t-shirts range in price from Ìâ£30 (about $45) for TSPTR’s 1960s-inspired Americana graphics to Ìâ£80 (about $125) for a t-shirt from Human Made, the much-fetishised Japanese brand designed by Nigo, the creative force behind BAPE. Ford identifies certain common elements in his best selling t-shirt designs. ”They are all bold and graphic. They have clean lines with messages and signifiers that can be perceived as simple and accessible but also as sophisticated and esoteric.”

Notably Ford’s most popular brands are purely that – fashion brands that command interest and loyalty through a combination of design and attitude – rather than symbols of affiliation to an actual subculture. ”The desire to show allegiance to something real through a t-shirt has become a pretty redundant ideal due to mass culture, and big brands swallowing and reappropriating underground culture and youth,” he explained. ”Just look at the stores selling Ramones t-shirts now. It doesn’t mean what it did.” 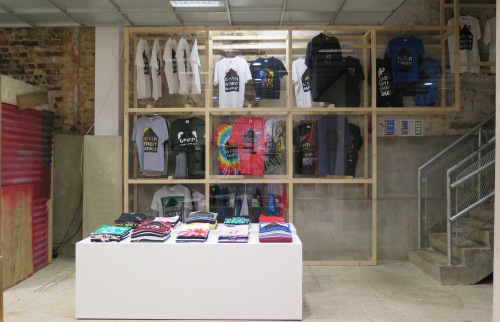 On July 11th, the London outpost of the high fashion retailer Dover Street Market opened for the new season with a dedicated space for t-shirts, including a large selection by niche, independent companies. ”We have been fortunate to have always worked with brands that make great t-shirts and graphics and thought it would be interesting to bring these together in one space in addition to giving credence to the many smaller or completely unknown brands that are out there doing great things,” explained Dickon Bowden, vice president of Dover Street Market. Occupying a 775-square-foot display on the entrance wall of the store’s street-inflected basement area, the sub-department brings together t-shirts from relatively established labels like Undercover and Palace; young, in-demand brand such as Gosha Rubchinskiy and Bianca ChandÌÄ«n; vintage t-shirts; and designs from unfamiliar labels, such as the Japanese outfits Chaos Fishing Club and Say Hello. Bowden sees the draw of the new department to lie in the ”eclectic mix of brands or artists from all kinds of disciplines, industries or sub-cultures in a concentrated, DSM way.”

Many of the brands represented in the Dover Street Market selection – including the magazine Pork, record label Innovative Leisure and the Bianca ChandÌÄ«n skate brand – produce apparel only as a sideline to their other activities. The designers behind them feel that the ‘authenticity’ of a t-shirt that has an actual point of reference still has cultural value, albeit in a more nebulous form than the pure fan garb of yesteryear. 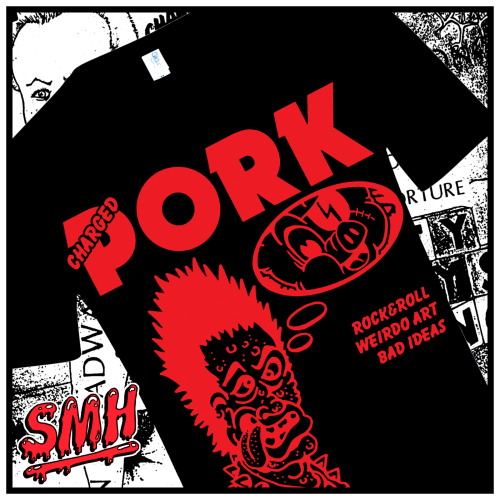 Graphic artists and designers Sean and Katie Aaberg started the ‘rock and roll low-lifestyle magazine’ Pork in Portland, Oregon in 2011. Merchandise, including pins, patches and t-shirts followed soon after, and they recently launched a record label Rock & Rule. Sean Aaaberg said that they were determined to have a ”silly number” of t-shirts on offer as an effective means of disseminating the magazine’s 1960s and 70s comix-inspired sensibility. As a result of this push, Aaaberg now has ”a lot of [art]work out there circulating around. It’s very satisfying to see people like Slash and Billie Joe Armstrong wearing my designs and I love seeing them pop up in the world.”

Aaberg considers multifaceted rebel upstarts like Pork to offer a spirited, opinionated alternative to a fashion industry that has lost its footing. ”It seems like the fashion world hasn’t had much of solid vision or grounding for a while now,” he said. ”So much of the trendy world at this moment is directionless and so vapid. They’re looking for healthy, vibrant beasts like us to suck the blood from.” T-shirts purchased via Pork’s Goblinko Megamall e-commerce site come with a free zine called Beans to cement the link between the shirts and the cultural production in which they are rooted.

LA-based record label Innovative Leisure likewise started producing t-shirts with their bands early on, giving the company an identifiable ‘look’ and personality as well as a sound. ”T-shirt’s have played an important point of physical contact with a band since the 1960s” and in the era of digital music, can be ”the more tangible asset that a fan connects with” according to co-founder Nate Nelson. In their e-store, Innovative Leisure offers almost as many t-shirt models as they do vinyl records. Merchandising provides a comparatively nimble revenue stream in an industry where royalties can take months to come in. ”It’s one source of revenue generation in our overall business model,” explains Nelson. ”It’s certainly faster to make t-shirts than it is to make vinyl. But the margin is not as high as a hit digital single or a healthy [advertising or movie] synch from a song.”

Priced between Ìâ£25 and Ìâ£130 (about $40 to $200), the t-shirts at Dover Street Market are – alongside the enduringly popular Comme des GarÌÄ¤ons wallets and perfume – among some of the store’s most affordable products. They are also among some of the best performing; the most recent drop of pieces from Alex Olson’s Bianca Chandon sold out online in a single day. 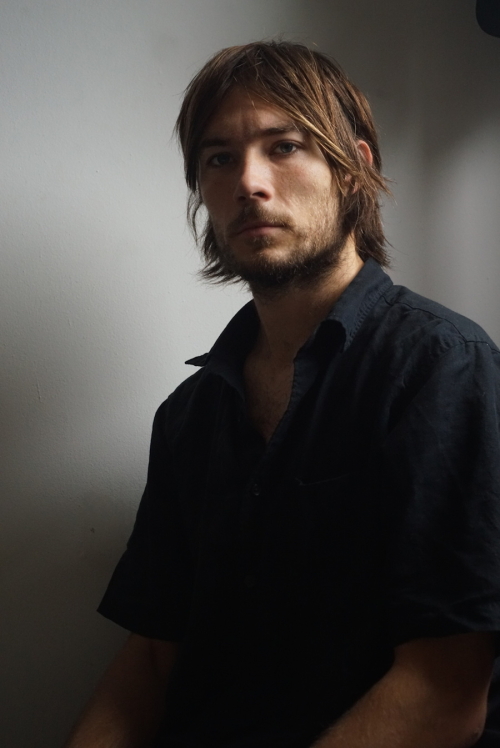 For second-generation pro-skater Olson, t-shirts and sweatshirts were the jumping off point for creating a platform which he sees eventually expanding into multiple areas of creative and skate endeavour. ”Coming up with the brand, everything involved with that process was interesting to me,” explained Olson, who brought the brand’s first T-shirts and boards to market in April 2014. ”The idea was to turn people on to making some kind of concoction of music, fashion and skating influence. At the moment we’ve just finished making a dance record.”

With 20 points of sale in Europe, Asia and the US – including stores run by skate brand Supreme – to Olson, the success of Bianca ChandÌÄ«n is clearly rooted in its impeccable connection to skate culture and the emotional pull exerted by the knowledge that the t-shirts he sells are the product of something more than a fashion label. ”I can’t speak for everyone, but maybe the consumer feels like a part of something more than just a brand. A lot of brands don’t align themselves to anything specific or constant. I think maybe that’s why skateboarding in fashion has taken on this big wave of a trend. It has a foundation and a history that crosses over in some ways.”

As a brand, Bianca ChandÌÄ«n is a complex construct, the name – part Bianca Jagger, part racing driver Olivier Chandon – was revealed via a pinup poster with a hook-up phone number that was bundled in with board purchases in that (swiftly sold out) first season. Promo images feature grizzled old dudes and outdoorsy girls rather than Olson himself. It’s his brand, but he’s leaving space for it to become something much larger. While Olson, like many of his peers, has been inspired by Supreme, and the way consumers hunger for the brand’s calculatedly limited output, in creating his own label he built on his personal attraction to the wider aura surrounding the lifestyle. ”Growing up from skateboarding, you look up to your favourite pros for many reasons”_ who they are as a person, the music they represent, their skateboarding style, their clothing style, what team they’re on, what the company is about,” Olson said. ”The list goes on and on. So maybe with that idea, I was a ‘fan’ of the culture more than any one specific brand.”

Craig Ford of anon* traces the t-shirt’s connection with rebellion back to American counterculture – itself a strong point of reference for many of the brands mentioned above – but also to the outsized logomania of the 1980s, and the protest slogans that were its counterpoint (one of the most famous of which was British designer Katherine Hamnett’s infamous ‘58% don’t want Pershing’ shirt – a statement of protest against a missile base – which she wore to a meeting with then British Prime Minister Margaret Thatcher).

”They are cheap and a very effective way of young people communicating to authority figures, whether it’s parents, teachers or politicians,” said Ford. He sees the growing appetite for graphic T-shirts today as rooted less in political fury and angst, than in the need for succinct modes of expression in an accelerated, image-driven culture. ”We live in a mass communication information age where many people have a short attention span and an identity crisis. A printed tee is a quick, sure-fire way to communicate and express your identity.”