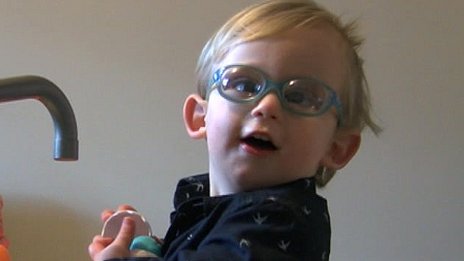 Tesco has withdrawn children’s clothing featuring animals in glasses and the words “geek” and “nerd” after a mother complained it could lead to her toddler being bullied.

The supermarket giant apologised and said the intention had been to show wearing glasses in a positive light, using the “reclaimed” words as indicators of being cool, the Crawley News reported.

But for Aneliese Whittaker, it was about much more than a T-shirt.

Her one-year-old son Logan Kelly was born with cataracts in both eyes, has had three operations and wears thick glasses that have led to teasing from other children.

In her initial complaint on Facebook, the Crawley mother asked: “Why is it OK to have a negative connotation associated to someone’s impairment?

“Why should my son grow up with people making fun of him because it’s ‘fashionable’?” she wrote.

For her, the issue was that while adults “have seen the terminology has changed its meaning, children don’t understand that”.

In 2013, the Collins Dictionary named geek as its word of the year and has also added “geekery”, “geek chic” and “geekdom” to its pages.

I’d imagine a parent may buy one as a humorous compliment, rather than as a detrimental comment on another child”

Previously, the dictionary had defined geek as “a person who is preoccupied with or very knowledgeable about computing” and “a boring and unattractive social misfit”.

Now, the main definition is states the word describes “a person who is knowledgeable and enthusiastic about a specific subject”.

Claire Lomax from children’s fashion magazine Fluxlings said while she was not surprised the clothing was withdrawn, she did not believe the T-shirts would have promoted bullying.

“Perhaps the opposite may just be true,” she said.

“These days, the geek or nerd image is actually quite desirable, and geeks and nerds know they are the core of the cool gang.

“Glasses are associated with this kind of image all over the media, on TV, film and magazines and you have people wearing glasses even when they don’t need them to get the look.

“I’d imagine a parent may buy one of these T-shirts for their child as a humorous compliment, rather than as a detrimental comment on another child.”

Miss Whittaker said her concern was that the clothes were marketed to children and she was “impressed” that Tesco took action after her “innocent rant”.ÊÊÊ