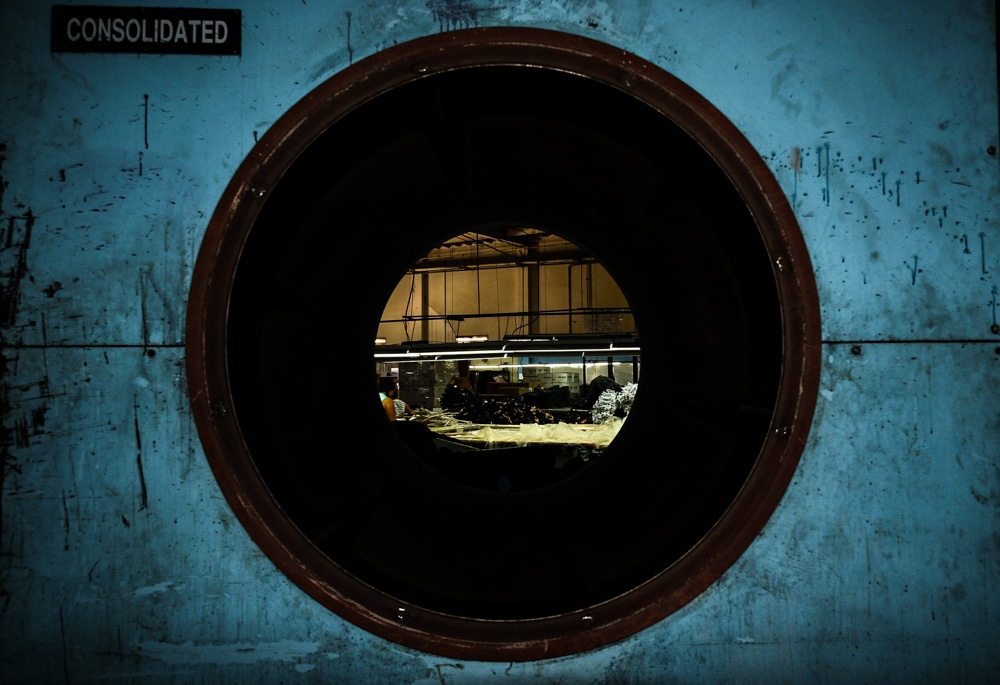 It was an ordinary Tuesday morning like any other, but already the heads around the boardroom table at SpectraTees HQ were bowed with foreheads furrowed in deep concentration and stern focus. A military green garment dyed t-shirt lay spread across the table, elephant-like, in the middle of the room. All eyes pressed against its rumpled silhouette and darted across the soft creases of its simple form. Whispers ensued. Nods were nodded. Notes taken. The fuss, that early Tuesday morning had to do with a t-shirt that the Spectra skunk works team had sent to the decision makers in the boardroom for consideration. The skunk works team is sometimes affectionately known as ”Black Ops” and this time it seemed, they had truly earned their moniker. What lay across the boardroom table was clear and irrefutable evidence that you could mature the hand of a t-shirt to a silky soft perfection without sacrificing wear-ability, lifespan or quality. The brows weren’t furrowed because of this, indeed, this was cause for elation, the brows were furrowed because Black Ops didn’t want to comb or card the knit, they didn’t want to change the cotton grade, the supplier, find new yarns or modify the design. They wanted to dye t-shirts differently and nothing more. What they had produced, through dyeing alone, would revolutionize Spectra’s t-shirt lines-both inventory and private label-and open up a can of fashion worms which will never be closed.

To Live and Dye in the Skunk-works

SpectraTees is a large company with a number of discrete divisions and specialty departments, though none is as secretive nor peculiar as the skunk works which is secreted away off-campus and dedicated to one task alone-research and experimentation. If there is a Spectra t-shirt you love, it is because the gurus in the skunk works loved it first. If there is a go-to printing canvas from the Spectra stable that a printer cannot do without it is because the skunk-works developed it first and nurtured it into existence. The skunk-works remains the giddy impetus behind all of Spectra’s unique designs and their latest endeavor had returned something truly unexpected and brilliant. What they had come back with began with a little known Italian design genius named Massimo Osti and a tiny part of his massive fashion legacy which changed the apparel industry forever and still continues to do so today. Which is partly why all those heads were so bowed and so deeply furrowed, the question on everyone’s lips was: Is America ready for a t-shirt this good?

The fashion zealots in the skunk works thought so, which is what had pushed them to it in the first place. The only thing now was for the decision makers to see the merit, understand that this kind of simplicity is rare, and then to take it on and make it ”a thing.”

Massimo Osti, the father of garment dyeing, was originally a graphic designer born in Bologna in Italy who cut his design teeth among the sharks in the big surf of the Italian apparel trade. He is easily the most influential Italian designer you’ve never heard of, but there is no question that his designs and fashion innovations have touched everything you have ever worn. In his lifetime he created a handful of exceptional fashion brands which still sell like hot-cakes on eBay (http://www.ebay.co.uk/bhp/massimo-osti), usually for outrageous prices. When he finally decided to open his first store in 1991 he chose to do so in the iconic Flat Iron building in New York where Broadway meets Fifth Avenue. In the process he gave us the perfect model for the concept store and ensured his beloved C.P. company would go on to become fashion legend. From these crazy heights it is hard to imagine this humble genius of Italian design getting his start in fashion by, you guessed it, designing prints for t-shirts.

Rewind to 1973 where Massimo Osti, by now an established designer in his own right, is experimenting with a quirky thing he calls ”garment dyeing,” where a garment composed of different types of fabrics is dyed only once it is finished, not in its various pieces-before it is stitched together. He tries different kinds of fabrics in the same dye bath together, over and over and over in one determined effort to rid fabrics of their stiffness, their ”newness.” He wants everything to feel soft, worn-in like a river stone, like a pair of old army trousers, indeed, he wants clothes to feel pre-lived and pre-loved. In the early 1970s Massimo Osti was heading into a battle the Victorian gentry had lost and conceded years before-having their butlers wear their new clothes first to break them in and soften them up in an arcane human stone-washing process to make their clothes might feel, lighter, smoother and softer. Stiff garments wear the wearer, they chafe, they rub, they irritate. Osti’s battle in 1973 was an age old one, the difference here is that Osti won it for us, coming up with the simplest solution: Dye the garment after you have created it, dye it intensely and use the dyeing process to temper it, to soften it up so that your butler can get on with polishing the silver and you can get on with wearing your clothes. This is the gift of garment dyeing. This is the legacy of Massimo Osti. This is how you make a world class t-shirt like Spectra’s even better, you stand on the shoulders of a fashion genius and you dip in into a river of dye, over and over again.

Stuck away in on the uncomfortable side of a baking hot, pavement melting Californian day, somewhere in the vicinity of Santa Ana is a dye house like no other. It looks like the set for the final big boss take-down from an episode of The Green Hornet. This massive industrial structure dwarfs everything around it and as you walk inside one can’t help but feel swallowed up, like Jonah and the whale, into a great big blue belly of machinery, chemistry lab smells and hue upon hue upon glorious hue of every color imaginable. Garments patiently wait their turn inside; piled up in barrows, they drip dry, they are removed and replaced, they are stirred not shaken in vats and enormous machines you can only think of as worked by giants, they are flipped and they are flopped. This is where the dye-masters wrangle the rainbow and turn it into t-shirts. This is Dye Hard Country, California. The mise en scÌÄ¬ne of the place is the gritty temperature of film noir, it is a David Lynch remake of Die Hard waiting to happen, it is pure street, it is raw California asphalt chic, and it is perfect. In here there is no process too obscure, no deep dip recipe uncharted, no palette unclaimed for the incredible team that drive this shop many colors the way a well drilled crew drives a battleship.

Spectra sent in a small batch of forty singles test garments in to test the efficacy of garment dyeing and, within the week the dye house team had solved the thorny problem of garment dyeing t-shirts in the style of the great Massimo Osti-making them soft without wearing them out, tempering and strengthening them so that they wouldn’t shrink at home (most t-shirts will experience around 5% shrinkage due to washing and wearing over their lifespan), and finally-as the faces around the boardroom table would tell you-they revealed a custom palette which could only be described as mouth watering.

To Live and Dye For

Without hype, the sample garments returned from the skunk-works are beautiful, and as the brows un-furrowed and Spectra re-jigged their production line and factory facilities to incorporate this innovative and remarkable garment dyed line of premium t-shirts a new direction emerged: Dyeing became an integral part of the Spectra design and production philosophy, whilst they quietly launched their new line of garment dyed t-shirts, appropriately named ”The Massimo” in their online store as a unisex item available in both male and female styles.
In turn, this opened the way for a river of dye processes, from mineral washes to acid washes, crystal washes and bombard washes, enzyme finishes to give a soft and gentle finish to even the coarsest fabrics. Spectra’s private label offerings simply exploded with variety and potential.

This is no mean feat and one which is difficult to maintain given the cut-throat nature of the apparel business as well as the numerous ”big fish” already in the water, who typically dominate the market with their high pricing and the discordant tune of their rigid and archaic production philosophies. Spectra’s coup de grÌÄ¢ce, in incorporating this remarkable dye house into their production and private label efforts, creates a new space for private label clients to explore a vast array of finishes, designs and washes to better arrive at their custom vision, perfected. This is achieved through the design genius and dedication of a committed and resourceful team, literally champing at the bit for new design challenges to solve, from color, to design, to fabrics through to re-engineering the limits of production runs. With the on-boarding of the awesome arsenal that is the dyeing facility the SpectraTees t-shirt becomes an elevated item where almost anything, and everything is now truly possible.ÊÊÊ