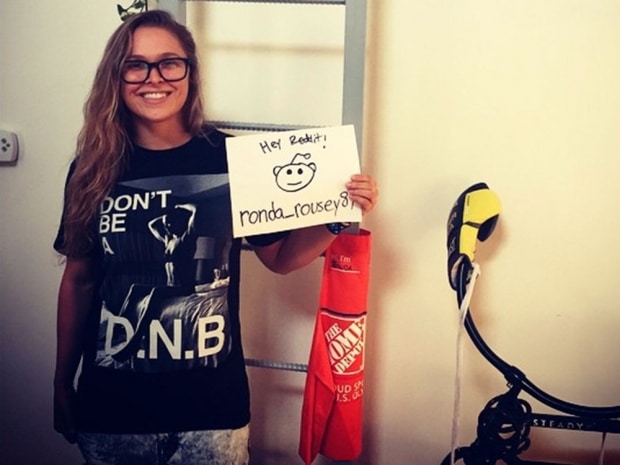 Ronda Rousey is officially the baddest woman on the planet. The 28 year-old mixed martial artist, made headlines recently after defending her UFC Bantamweight Champion title for a record sixth time after knocking out her opponent, Bethe Correia,Ê in seconds.

She also hit headlines when the UFC released a video of Ronda where she said: ”It’s hilarious when people say my body looks masculine,” she said. ”I think it’s feminist-ly bad-ass as f**k, because there’s not a single muscle on my body that isn’t used for a purpose.”

“I have this one term for the kind of woman that my mother raised me to not be. I call it a ‘do nothing bitch’. Or, I call it a ‘DNB’ a lot of the time,” said Ronda.

Now Ronda, who has attracted both praise and critiscm for her comments has now started selling t-shirts with the slogan, ‘don’t be a D.N.B’ and according to reports, she’s already sold 13,000 of them for charity.
Today, Ronda has also said she would win in a fight against boxing legend Floyd Mayweather, ”Floyd is one of the best boxers of all time. He would definitely beat me in a boxing match. I unfortunately don’t get into ”matches.” I fight for a living. In a no rules fight, I believe I can beat anyone on this planet. Boxing is a sweet science with strict rules that I respect very much and aspire every day to improve at. But you said ruleless fight, and that’s my honest answer.”

There’s no getting around it, this lady means business.

Incredible? Brilliant? Or are her comments just pitting women against each other? Tell us what you think…