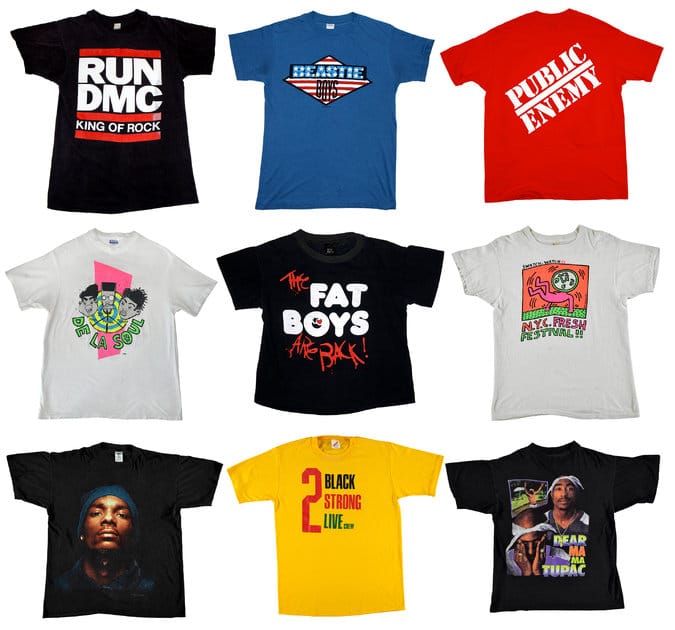 By JON CARAMANICANOV from nytimes.com

Rap tees catalogs two decades of hip-hop merchandising. Commercialism has long been one of hip-hop’s prime ambitions. Yet ”Rap Tees” (powerHouse) suggests that for many years hip-hop had in fact been under-merchandised. Credit Photographs by DJ Ross One

The new photo book ”Rap Tees: A Collection of Hip-Hop T-Shirts 1980-1999” by DJ Ross One documents 500 shirts, from hip-hop’s dawn – the first item is a Sugar Hill Gang shirt from 1980, a year after that group released ”Rapper’s Delight,” widely considered the first commercial hip-hop single – to its turn-of-the-millennium ubiquity. All the shirts are advertisements, but they go about their job in vastly different ways: Some emphasize logos, others favor slogans or let photos do the talking; a rare few let artists have their way.

Commercialism has long been one of hip-hop’s prime ambitions. Yet ”Rap Tees” (powerHouse) suggests that for many years hip-hop had in fact been under-merchandised. It’s striking how many of the best shirts weren’t official or for sale. Several were promotional items, given out to tastemakers and fans. And many weren’t by the musicians at all, but bootlegs made on the cheap and distributed broadly.

That means that this book begins as a document of the hip-hop industry’s efforts to branch out beyond music, and by the end shifts to the flea markets, swap meets, sidewalk stalls and parking lots where street-level entrepreneurs, recognizing that rabid fans were also underserved customers, collected money that the rappers and their record labels were leaving on the table.

DJ Ross One, a tenacious and sharp-eyed collector, owns about half of the shirts in the book, and he tracked down and photographed the rest. His list is organized by artist and by region, in more or less chronological order.

Over the two decades covered here, the nature of the hip-hop T-shirt evolves. In hip-hop’s first true corporate era, from the mid-1980s through the early 1990s, the artist logos were essential. About 20 shirts in the book depict the classic Run-DMC logo – bold white capital letters, ”Run” stacked atop ”DMC,” sandwiched between two red lines. Some are on elaborately designed sweatshirts made in partnership with Adidas, the first example of the fashion world aggressively embracing hip-hop.

The book devotes extensive sections to the logos of the Beastie Boys, based on the Harley-Davidson mark, and Public Enemy, perhaps hip-hop’s most iconographically adept act. In addition to around two dozen Public Enemy shirts, ”Rap Tees” reproduces pages from Rapp Style, the group’s mail-order catalog, which offered items like jackets, T-shirts, hats, and mugs. Rap music’s loudest and most radical polemicists were also its most effective salesmen and branding experts.

In that era, logos were lifelines: the bubble letters of the Fat Boys, the tough scrawl of Naughty by Nature, the pastel scribbles of De La Soul. But by the mid-1990s, the logos began to fade in importance as the rappers themselves became global stars, and music videos codified and promoted hip-hop fashion as a stand-alone style. Instead of buying a T-shirt to be a part of the movement, you could dress just like the stars. (Hip-hop’s increasing awareness and adoption of high-end fashion, and the first wave of hip-hop streetwear companies, helped push the trend along.)

Some of the book’s examples flew in the face of that looming mass dissemination, especially the varsity jackets that served as promotional items for record labels like Def Jam, Luke Skywalker, Roc-A-Fella and what appears to be Heavy D’s personal Big Tyme Records jacket.

Those jackets indicate membership on a greater team, but lack some of the ephemeral grace of the T-shirts. Keith Haring’s artwork appears on the T-shirt for the first New York City Fresh Festival, a multi-artist concert, in 1984. Several iterations of shirts from a single LL Cool J tour are displayed: The designer, Cey Adams, talks about how he would work on the fly, creating new shirts in different cities as the old ones sold out.

The politics of the day often made their way to these shirts. One for Queen Latifah screamed, ”Who U Callin a Bitch???” The free-speech and free-love warriors 2 Live Crew used pointed political and sexual slogans. There are ugly relics as well, like the Beastie Boys T-shirt from 1986 with a gay slur on the back, which, all apologies aside, can’t be erased from history.

T-shirts were also sites of reaction, as seen in the countless pulpy memorial shirts for the Notorious B.I.G. and Tupac Shakur. These are done in what has become the definitive bootleg style: cut-and-paste graphics with text in loud, slightly corroded fonts, generally on a black T-shirt. That style is inescapable in this book’s second half, whether it’s done for New York street stalwarts like Mobb Deep or Southern titans like Master P. By the mid-1990s, the dominant design aesthetic no longer came from record-label graphic designers; it was this much more democratic clip-art style.

Given that so much of the essential product is from the gray market, by definition ”Rap Tees” is incomplete. The chance of making a true catalogue raisonnÌ© is nil. And ”Rap Tees” ends just as hip-hop becomes a global economic force, missing the era when the energy shifted from creating artist-focused T-shirts to founding retail empires – Sean John or Rocawear or Billionaire Boys Club or any number of came-and-went companies. (Vokal! Bushi! Benjamin Bixby!)

That meant that bootlegs remained unchallenged as the dominant T-shirt aesthetic. Vintage shirts of the kind collected in ”Rap Tees” can fetch a few hundred dollars on eBay or at specialty dealers like Procell and For All To Envy. And young designers like Darien Bruze and CokeMagic are reimagining the old bootlegs and designing new versions. What was once an improvised stopgap is now the standard.(Hip-Hop Merchandising)

A version of this article appears in print on November 17, 2015, on page C1 of the New York edition with the headline: Rap’s Historical Artifacts.ÊÊÊ