(Note: CBC does not endorse and is not responsible for the content of external links.)

Employment Minister Pierre Poilievre’s Monday morning press conference about the universal child-care benefit may have broken rules designed to keep government and partisan business separate, the second time he has been accused of blurring the line between the two in the past three months.

Poilievre launched a day of ministerial press conferences Monday to remind Canadian parents they’re getting money back from the government – albeit money that will be taxed next spring.

But he raised questions about the appropriateness of his clothing choice when he sported the Conservative Party short-sleeved shirt to a Canadian government event. 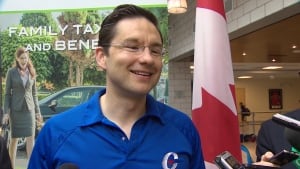 Canada has strict rules about using partisan logos at government events to prevent a governing party from using taxpayer money to promote itself.

Civil servants are instructed to inform the public about policies and programs “in an accountable, non-partisan fashion,” according to rules set out by the Treasury Board, which sets rules for Canada’s federal bureaucracy.

“[Government] Institutions must not participate in, or lend support to, partisan events organized for political party purposes,” according to the rules.

Poilievre’s spokeswoman didn’t respond to a request for comment, nor did the department.(POILIEVRE’S SHIRT)

The press release regarding Poilievre’s event, which outlined a series of other MPs promoting the benefit, was produced by the federal government and not the Conservative Party.

The universal child tax benefit, or UCCB, is a taxable benefit first put in place in 2006 and increased for 2015. But $3 billion in lump-sum payments were delivered to Canadians Monday because the increase was included in last spring’s federal budget, which couldn’t be put in place before Parliament voted to approve it.

NDP Leader Tom Mulcair on Monday repeated his promise to continue the UCCB but augment it with one million child-care spaces, which the NDP say they would provide to parents for $15 a day. Liberal Leader Justin Trudeau says he would cancel the UCCB and replace it with a tax-free benefit that’s worth more to families making less than $150,000 a year. The Liberals say they would pay for the plan by ending benefits for families making more than $200,000 a year.

Monday isn’t the first time Poilievre has been criticized for using government resources for partisan ends.

Last May, the Globe, and Mail reported Poilievre used public servants from his department to shoot video of him meeting constituents, which was subsequently used in a partisan video.

Despite criticism in question period over the taxpayer-funded overtime,Poilievre was unrepentant.

“I make no apologies for informing parents of the expanded universal child-care benefit,” he said at the time.”

NDP Treasury Board critic Mathieu Ravignat, a former federal public servant, called the T-shirt inappropriate, and said there’s a time to be a minister and a time to be a cheerleader for one’s party.

“This blurs the clear line between … [the] partisan nature of an event and the public service, and its need to be objective,” Ravignat said.

“Are they going to have a Conservative logo on the tax bill you get sent when they claw this benefit back? My guess is no,” he said.

Poilievre drew a number of snarky tweets Sunday when he referred to the day the money would arrive as “Christmas in July.”