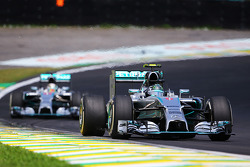 As the Abu Dhabi paddock begins to fill, F1 pundits are busily picking their favourite for the 2014 world championship.

“I have seen some excellent races from Lewis (Hamilton) this year,” said former F1 driver Mark Webber, “and he will be very strong in Abu Dhabi.

“He always is,” said the Australian, who echoes the sentiments of the majority of the paddock who agree Briton Hamilton is the title favourite.

But Webber insists that Hamilton’s Mercedes teammate Nico Rosberg, although 17 points behind, is still in the reckoning.

“It doesn’t matter who was strong where – that was then, this is now,” he said. “Both have done an incredible job this year,” he told the Austrian newspaper Salzburger Nachrichten.

Damon Hill, the 1996 world champion, is putting his money on countryman Hamilton.

“Lewis will do it,” he is quoted by the German newspaper Bild.

“I simply cannot imagine a race situation now where he loses the title to Nico, who I think knows that Lewis is just a little bit better than him.”

John Booth, the team boss at Marussia, told the Mirror that if Rosberg does snatch victory from Hamilton at the last hurdle in Abu Dhabi, “It would be a travesty”.

The best for one, and the bitterest for the other

Mercedes is remaining impartial, but boss Toto Wolff admitted to reporters this week that the “nightmare” scenario is a technical failure that robs Hamilton of the title win due to the highly controversial ‘double points’ system.

No matter what happens, one silver-clad driver will be disappointed after the chequered flag waves on Sunday.

Austria’s Sportwoche reports that, because of that, Mercedes has not prepared the customary celebratory t-shirts bearing Hamilton or Rosberg’s name.

Wolff explained: “I had a long conversation with Lewis and he said very clearly that Sunday will be the best day of his career for one of them, and the bitterest for the other. He is spot on.”

Team chairman Niki Lauda agrees: “To me they are both world champions, but after Abu Dhabi only one of them will be.”

Whether he wins or loses, Hamilton looks set to sit down with Lauda and Wolff in the days immediately after Abu Dhabi to talk about a new contract beyond 2016.

Lauda told the Daily Mail: “I have heard stories that Lewis wanted to sign for Ferrari, but that is absolutely wrong.

“Lewis requested we leave the contract talk until the season was over. He wanted to concentrate on his racing. We had exactly the same opinion.

“He will stay regardless of whether he wins or loses on Sunday,” the F1 legend added.