By Charles Manning from cosmopolitan.com 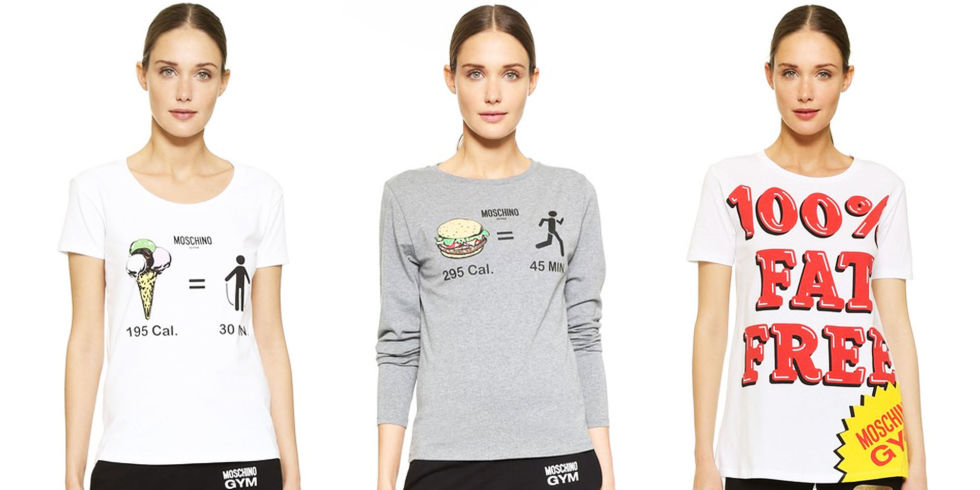 Don’t you just ”Û_love”Û_ when you indulge in something really delicious and then run to the gym to sweat the calories off before they turn to cellulite on your disgusting, worthless pig body? Isn’t that just the best? The steady swooshing sound of the elliptical. The mind-sucking monotony of moving your whole body without actually going anywhere. And that little calorie counter urging you on as you make the transition from hideous dumpster troll to viable human being. So fun, right? I mean, like, it sucks, but that’s just the punishment you deserve for eating all that ”Û_food.

If only there were a T-shirt that expressed just how much you love to hate yourself. Something to remind you, and anyone around you, that every calorie is a choice. Well, thanks to Moschino, there is! And not just one T-shirt, but three! Yay!

Now, for a mere $130, you can wear your food issues and your skinny jeans at the same time. That might seem like a lot of money for a white cotton T-shirt, but at least you’re not spending it on ”Û_food. Because food is the worst. Chanel (of ”Û_Scream Queens) ”Û_never eats food, she just soaks cotton balls in assorted low-calorie sauces. And look at her! She is the president of her sorority, has an amazing wardrobe hand-picked for her by Karl Lagerfeld, and is dating the ”Û_hottest”Û_ guy in school. Ugh! Life goals much?

Now, please excuse me. I caught a glimpse of some full-fat milk in the fridge a few minutes ago and need to go do some crunches before I turn into a sub-human monster.