If bands are brands, can concert T-shirts still represent something real?

By NATHALIE ATKINSON The Globe and Mail from theglobeandmail.com 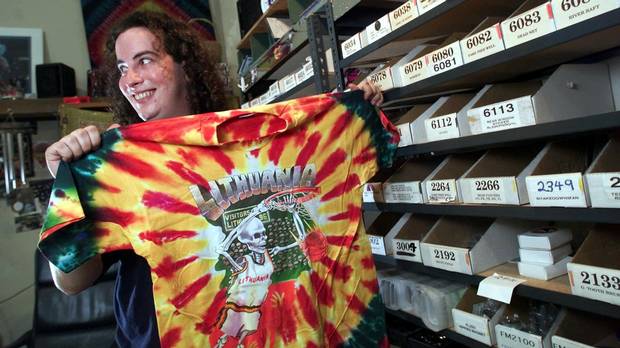 The concert T-shirt is a peculiar garment. In the summer of 1986, I bought one from The Smiths’ final The Queen is Dead tour at the HMV store in Oxford Circus. Back then, owning one had already ceased to be a way of bragging about attending a show, bought off the merch table at a tour stop. Instead, like a designer-logo-laden handbag, the garment had become a way to proclaim allegiance to a brand (or band) and the spirit of rock and roll in general.

That spirit is a long way from the early years of the Grateful Dead, which is currently celebrating its 50th anniversary. In those good ol’ days, the Haight-Ashbury mavens rejected the straight, corporate world of their parents’ generation and embraced the band’s underground merch economy, swapping bootlegged T-shirts and tapes in the parking lot after its shows. But in 2015, you can dress your dead head in a 50th anniversary logo hat, purchased for $24 through dead.net. Band merchandise is no longer a marker of face-to-face interaction between musicians and their fans, so can it still signify something authentic?

The legendary, mid-1960s rock-concert promoter Bill Graham (he built buzz for acts like Jefferson Airplane, George Harrison and The Band) was among the first in the music industry to appreciate T-shirts as collectible and lucrative souvenirs with a similar cachÌ© as promotional posters. A decade earlier, off-duty military officers had started to popularize the idea of a T-shirt as a piece of outerwear (they were previously only worn as undergarments) and actor James Dean infused them with a sense of cool and rebellion.

Thanks to innovations in textile printing in the late fifties, stretchy inks like Plastisol and the use of heat-transferable decals led to the design of more elaborate typefaces and images for clothing. By 1975, Graham had created Winterland Productions, the first concert T-shirt and merchandise retailer that enabled artists to receive royalties from the sale of promotional products (it went on to become part of Clear Channel, and then entertainment behemoth Live Nation). While the Grateful Dead adopted a laissez-faire attitude towards unauthorized stuff, most artists had already begun to see T-shirt sales as another important revenue stream.

It might chagrin counterculture vultures to know that well before fashion victims were covered in designer trademarks, the earliest logos people wore were those of the bands they saw in concert. The graphics themselves have always been a big selling point. Led Zeppelin’s Swan Man logo and the Rolling Stones’ Lick motif are both pervasive in the band T-shirt marketplace, as is AC/DC’s lightning bolt and the stylized letters of KISS. While those designs often pale in comparison to the more elaborate album and poster artwork that accompanies the bands’ musical releases (created by industry favourites including Peter Corriston and Storm Thorgerson), they’re often more memorable thanks to how often they appear on everything from bumper stickers to insulated coffee cups.

They can also cost an arm and a leg. If you’re in the aftermarket for vintage originals, a 1976 Lynyrd Skynyrd Slayer piece will set you back a few hundred bucks on Etsy. That might seem like a lot to spend on a few yards of decades-old cotton until you consider that the simple navy T-shirt Elektra Records used to promote Led Zeppelin’s House of the Holy in 1973 can go for up to $3,800.

There is relatively affordable hope, however, for the cause of the concert T once again being about the music. Just as Graham harnessed printing advancements, Astrella, the mononymous designer daughter of mononymous psych-pop star Donovan, is tapping into the smartphone explosion to connect what people wear and what they listen to. Her Musical Ts – the summer collection features the likes of Elton John and The Who – come tagged with a bar code. Scanning it with a mobile device gives shoppers access to streaming music, memorabilia and other multimedia elements from the featured artist. It might not be the same as seeing an act live and commemorating it with a crisp new crew neck, but at least you can say you dropped $82 and got more than a lousy T-shirt.