BY SCOTT MALONE from reuters.com 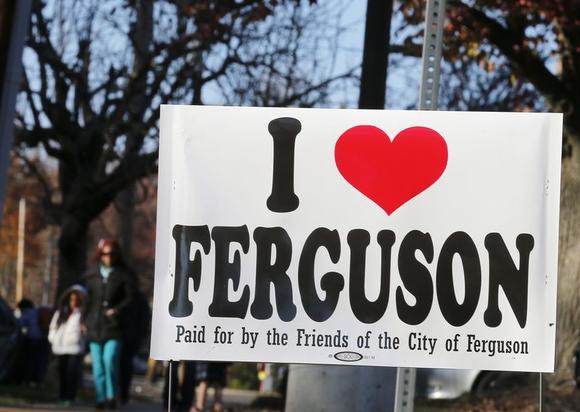 A sign is seen on a street before the verdict by the grand jury in the indictment of Darren Wilson, in Ferguson, Missouri, November 14, 2014.

(Reuters) – The streets of Ferguson, Missouri, bear two hallmarks of the months of sometimes violent protests that followed the August police shooting of an unarmed black teenager by a white police officer.

One is boarded-up shop windows, the other, ever-present “I Love Ferguson” signs, T-shirts and stickers.

The signs were dreamed up by the city’s former mayor, Brian Fletcher, 55, a week after the Aug. 9 death of Michael Brown provoked rioting in which businesses were burned out. Sales of “I Love Ferguson’ signs, T-shirts” merchandise have become a fund-raising tool intended to help the damaged businesses.

Sitting in the “I Love Ferguson” store that opened late last month, just down the street from the local police department that has been the site of repeated demonstrations, Fletcher said he started the campaign, with a few friends, hoping to spruce up the troubled city’s image.

“The way Ferguson is being portrayed is unfair and inaccurate. It looks like we are under siege, like we are Beirut or something and it’s not like that,” Fletcher said, surrounded by T-shirts, sweatshirts and stickers that bear the logo, in which “Love” is replaced by a drawing of a heart.

If not under siege, the St. Louis suburb is clearly on edge as residents await word on whether the grand jury reviewing Brown’s death will bring criminal charges against the police officer who shot him, Darren Wilson.

There have been conflicting witness accounts of how the shooting happened. Some witnesses have said he had his hands up in surrender while others have described the incident as a struggle between Brown and Wilson.

Police and protesters alike are planning their response to the grand jury’s decision, which could come any day. If Wilson does not face criminal charges, many fear Ferguson could see another wave of violent protests.

In the meantime, Fletcher hopes the “I Love Ferguson” campaign can raise residents’ spirits as well as money to help businesses such as a barbecue restaurant that was burned out a week after Brown’s death.

Fletcher has set up a certified non-profit corporation to handle funds raised by selling the T-shirts and signs. So far it has donated $15,000 to a local redevelopment company, which has in turn paid it out as grants to 23 businesses damaged in the riots, he said.

The group has placed more than 9,000 lawn signs and sold thousands of T-shirts, Fletcher said.

Donna Thayer, a 72-year-old retiree who has lived in the Ferguson area her whole life, stopped by the shop on Saturday to buy a hooded sweatshirt bearing the “I Love Ferguson” logo.

“I’ve always been proud of Ferguson, I want to show support,” Thayer said. “What happened here was terrible. It’s very upsetting to me.”