The History of T-shirts 3: The T-Shirt Revolution 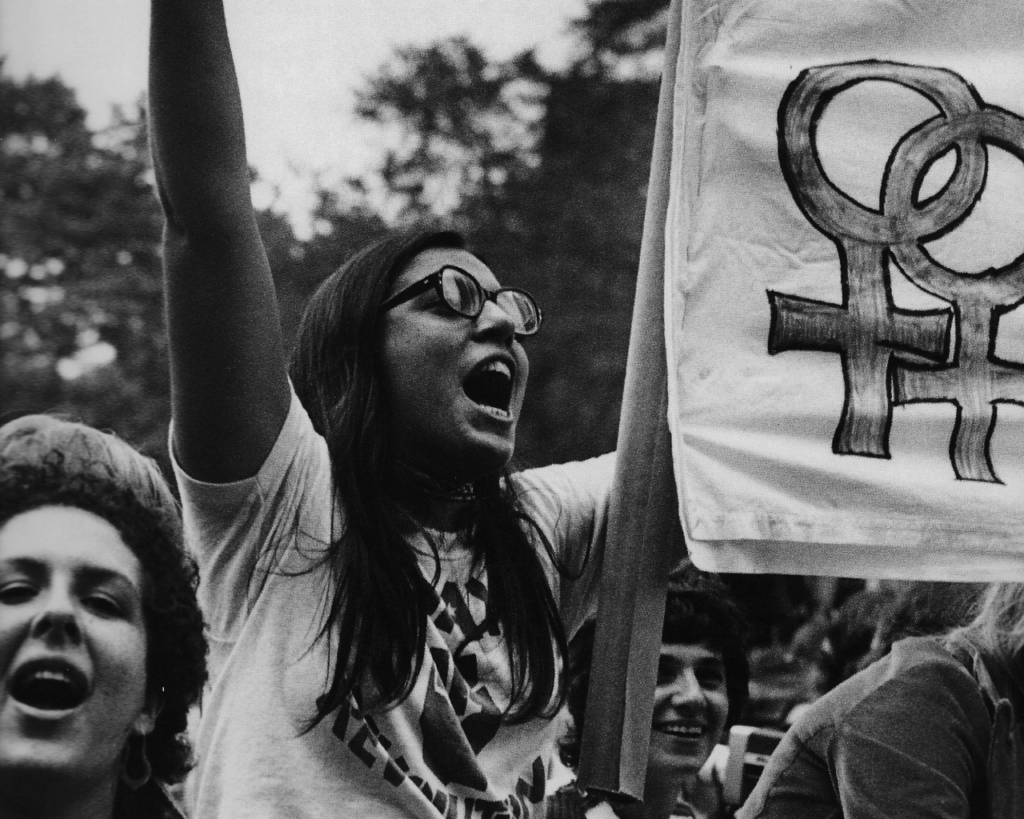 From the earliest time, the T-shirt has been the world’s favorite and most practical intimate garment. We’ve watched as our favorite item of underclothing has grown up, shed both buttons and Victorian sensibilities, gone swimming, joined the army, headed off to work and helped to open a few cold ones on the weekend. It has clothed kings, criminals, astronauts, presidents and men and women of every creed, color, nationality, and station of birth. In the last half of the twentieth century it was the politics and fashion of the t-shirt, not its practicalities, which were honed and redefined by the tidal wave of change brought on by the counter-culture movement and the sexual revolution. In a time of enormous social upheaval the T-shirt established itself as a power player in every social and cultural movement which defined much of the latter half of the last century. The T-shirt revolution began somewhere in the 1950s…

The T-Shirt Giveth, and the T-shirt Taketh Away

The axis of the T-shirt revolution was the human body and the way a T-shirt fits it snugly, accentuating the torso, muscles, nipples and sexual characteristics of the wearer hidden only vaguely beneath it. What the T-shirt conceals it also partly gives away, making a T-shirt something of a whispered secret you can almost overhear. In the 1950s, when Stanley Kowalski (Marlo Brando) marched onto the silver screen, in A Streetcar Named Desire, wearing his sweaty work T-shirt people swooned for a reason: This T-shirt was not simply an item of underclothing protecting Kowalski’s modesty, it was a raw sexual threat. An ugly, aggressive come-on from a brute, lovingly wrapped in cotton knit. The emergence of the T-shirt from under- to outer-wear flew in the face of established social taboos against flagrant male sexual displays. This defining moment become a flirtatious fashion (and later an anti-fashion) trend across the twentieth century with the T-shirt both revealing and simultaneously concealing bodies, to the delight, and the horror, of its audience.

T-shirt Taboos & Totems: The birth of the T-shirt revolution

There remains something essentially taboo about the genders swapping their clothing.Ê It’s an erotic act, for a woman to don traditionally male outfits, such as the tuxedo for example. This is just as true for t-shirts which, up until mid-way through the twentieth century, had largely been seen as part of the male wardrobe, mostly taboo for women. It took a group ofÊ coquettish, aspirant starlets on the beaches of St Tropez to change all that. In 1957 these French movie actresses began appropriating their boyfriends’ white cotton t-shirts on the beach-probably more out of convenience than revolution-mongering-and gave birth to an instant sensation. The idea that women could throw on their boyfriends’ old cotton tee and still remain desirable, beautiful and feminine only added more fuel to the blue jeans and white tees teenage craze of the time. A year later Vachon, the St Tropez-based design house, was selling white cotton T-shirts which, in turn, they seem to have copied from one of the early designs first worn and championed by Coco Chanel as a pullover as early as the 1930s. With Brigette Bardot modeling Vachon’s gear on that famous French beach the term ”hot cakes” fails to adequately capture the sensation around these garments. The athletic shirts, tanks and undershirtsÊ simply flew out the door at the speed of”_ consumerism. In many ways the t-shirt was establishing itself as the casual-wear version of the more formal ”little black dress,” a garment which was primed, and appropriate, for almost any occasion.

As Vachon discovered in St Tropez, fashion is big business, and it wasn’t long before Christian Dior was showing a striped velvet T-shirt in his couture collection in ’62, with a spate of other designers bandwagoning after. Yves Saint Laurent would later declare that, ”All a 20-yer-old girl needs is a T-shirt and a pair of jeans.” In many ways that remains true today for both fashionable women and men. Still, beneath the giddy heights of high-fashion, the T-shirt was embroiled in relentless experimentation with dyeing techniques, seam length, colors and patterns, fading, bleaching, and printing. It was the start of a phenomenon you probably know better as “Street Fashion.” From these early roots an entire industry sprung up behind this, most improbable champion.

The 1950s is also remarkable as the time when the T-shirt first became a souvenir. Walt Disney and Roy Rogers both saw the possibility to offer folks a souvenir ”opportunity” and, with the invention of a durable ink which had stretch, T-shirt printing began to take hold in a serious way. Madison Avenue advertising concerns soon crashed this party and by the time the first Budweiser logo graced a T-shirt in the 1960s the ”party” that T-shirt printing was having, was rapidly becoming the mother of all blowouts, with corporate logos of every flavor lining up behind Bud to get their name onto the chests of the general public.

If stories like these characterized the T-shirt of the fifties, by the sixties the T-shirt was well entrenched as an item of clothing which belonged equally to both genders. Street fashion, for one, had become ”a thing,” with youth as the ultimate yardstick, along with a sense of androgyny and a healthy disregard for the established norms and mores of the day. It is unclear which pivotal moment in the history of the twentieth century is acknowledged as that transcendent instant when the T-shirt first met the street, but I believe it is universally agreed that we are better off for it. From Jackie O wandering around New York in the 70s in her famous navy-blue t-shirt, to the last of the hippies and later, the first of the punks, in the 1970s, the T-shirt was to street fashion what the light saber was to Star Wars-a powerful and indispensable totem.

Whilst mainstream culture scrambled to get logos, branding, and beaming politicians onto t-shirts, the counter culture movements of their time took the self-same canvas and decked it out with anti-establishment slogans, icons and sentiments and promptly waved these new flags of protest back at them. The beauty of the T-shirt revolution is that the T-shirt did not pick sides, it was merely the messenger, and a powerful messenger too, at once declaring allegiance with the message, and ownership of the mind and body wearing it.

Not surprisingly, by 1975 fashion magazines were already of the opinion that the T-shirt had become so culturally entrenched that it would never go out of style, like shoes, hats and trench coats; with Vogue calling it ”The single most powerful fashion metaphor of the century;” Harper’s called it, ”The little white wardrobe wonder.” The model Jean Shrimpton had one in white with her portrait on it, which she had also autographed. Perhaps the first truly comprehensive, ”selfie,” and decades ahead of its time.Ê It was also around this time that the anti-fashion movements also, and somewhat ironically, began appropriating the T-shirt for their own means. Offering a variety of interpretations and departures from the original pure white canvas. The messages may have changed a little, but the medium remained the same-few things are as poignant or powerful as a sharply worded declaration on a white T-shirt.

And then came Punk. That glorious, singular moment where music, youth culture and London and New York seemed to collide. A movement that reveled in the destruction and deconstruction of the T-shirt, and rapidly resurrected it like a fashion Frankenstein with safety pins and protest buttons, and then promptly destroyed it again. The T-shirt, could not have received a better baptism of fire than punk to firmly establish it as the holy grail of street culture. The aftermath of the T-shirt revolution of the twentieth century is a gender dodging, slogan waving, indispensable coin-of-the-realm in the visual currencies of subculture and cool. The T-shirt revolution had taken over the wardrobe of the world. There would be no going back.

Spectra USA makes a “Roughneck” model, a perfect homage to the heady days of civil disobedience and social protest. The 2001 Roughneck is one tough customer, able to hold its own in any mosh-pit, mechanics’ work bench or punk deconstruction session. Made from 100% cotton, this 18 singles open-end yarn tubular tee is the pinnacle of 1960s styling and retro-feel. Marlon Brando and Brigette Bardot would be proud to throw this little white number on and strut their stuff, be it in St. Tropez, or the working class backyards of New Orleans’ French Quarter.