by PATRICK FITZGERALD from theaustralian.com 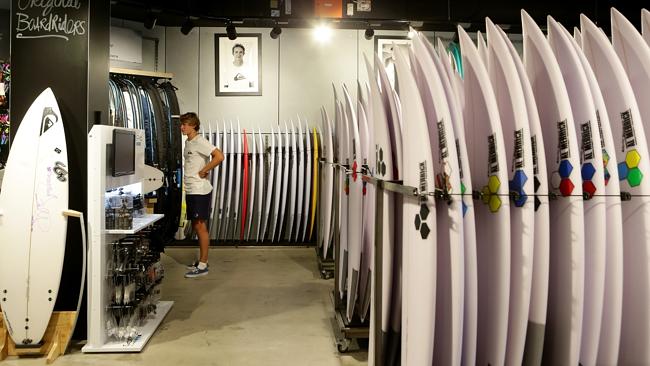 A Quiksilver store on the Gold Coast. The retailer’s Australian operations aren’t part of the US bankruptcy filing.Source: News Corp Australia

In a filing in US Bankruptcy Court in Wilmington, Delaware, lawyers for Quiksilver’s creditors revealed that Brigade Capital had made a ”superior” offer to finance the company’s restructuring under chapter 11.

Brigade is offering Quiksilver a $US115 million ($A156m) bankruptcy loan that is ”cheaper, longer in duration and provides the debtors with greater flexibility,” the creditors said, a part of a transaction that is better than Oaktree’s ”with respect to virtually every substantive economic and non-economic term.”

Quiksilver filed for bankruptcy last month in a $US279m debt-for-equity swap with Howard Marks’s Oaktree Capital. The deal includes $US175m – but only $US115m of new money – in bankruptcy financing provided by Oaktree and Bank of America that has allowed the company to keep its doors open during its chapter 11 restructuring.

The deal also includes a hefty $US20m breakup fee owed to Oaktree if Quiksilver, which owns more than $US200m in Quiksilver debt, fails to execute the swap in bankruptcy.

The Oaktree-backed plan ”does not represent a new offer from an outside investor who could just as easily walk away if the terms prove unsatisfactory, but a strategic manoeuvre by Oaktree to protect its substantial investment while simultaneously sweeping up significant value from unsecured creditors,” the creditors said in court papers.

Representatives of Quiksilver and Oaktree couldn’t be reached for comment.

Los Angeles-based Oaktree is a big player among so-called distressed-debt firms that look to acquire troubled companies at discount. It owns 73 per cent of Quiksilver’s debt and has pledged its support for the restructuring, which requires court approval. Oaktree also owns a stake in Australian surfwear company Billabong after participating in a 2013 restructuring.

A hearing on the Oaktree-backed deal is scheduled for Wednesday.

Quiksilver is one of the best-known and longest-operating surf and snowboard clothing brands, designing and distributing its products under the Quiksilver, Roxy and DC brands.

The company, which traces its roots to Victoria, began making boardshorts for surfers in the US in the 1970s and is now based in Huntington Beach, California. Its products are also sold internationally; the European and Asia-Pacific businesses aren’t part of this bankruptcy filing.

The cash-strapped company has in recent years been plagued by business issues that slowed the delivery of Quiksilver products to stores in North America. It has been working to turn around the business since 2013, executing the sale of assets including Mervin Manufacturing, a snowboard maker, and Hawk Designs, named for skateboarder Tony Hawk, and a stake in an online retailer called Surfdome Shop.

Although those deals raised funds, operational troubles and continued weak results were exacerbated earlier this year by the labour strife at the Port of Los Angeles.

Quiksilver’s revenue in its most recent quarter decreased to $US333m with margins at 47.1 per cent, resulting in a net loss of $US38m. During the same quarter in 2014, the company reported a loss of $US38m on revenue of $US397m and margins at 48.9 per cent. The company listed assets of $US337m and debts of $US826m when it filed for bankruptcy protection.