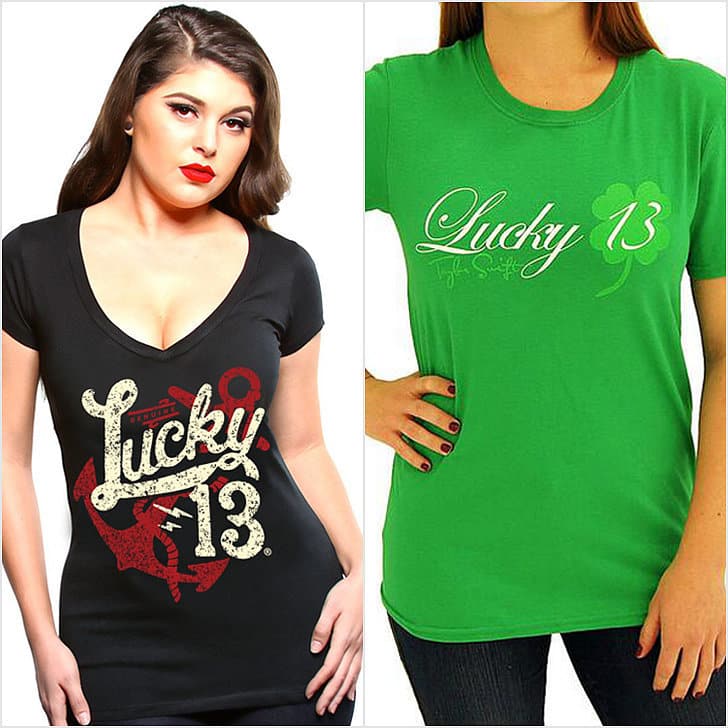 by Samantha Sutton from popsugar.com

Fan or not, most of the world knows that Taylor Swift‘s lucky number is 13: it’s the day the star was born (in December of 1989, of course), and on more than one occasion, she’s written it on her hand or rocked it somewhere in her outfit. So naturally, when St. Patrick’s Day rolled around, the singer’s team sold a limited-edition “Lucky 13” shirt on the star’s site – and that’s when some serious drama started.

Apparently, unbeknownst to her (and, quite frankly, us too) there’s a clothing brand with the same name, and the boss of the company, Robert Kloetzly, is not happy. So much so that he’s filed a trademark lawsuit against Taylor, claiming she’s targeting the same audience as his brand, which, according to him, is women who love tattoos, “fast cars, and dangerous men who drive inappropriately.” (Clearly he’s taking those Style lyrics – “he can’t keep his wild eyes on the road” – very literally.)

But the strangest part of the story is that Kloetzly’s also asking for any promotional content where Taylor showed off a little bit of cleavage and maybe her butt, because that means she’s using sex to sell these items, which he alleges was actually his idea first. According to him, the video for “I Knew You Were Trouble” could have basically been an ad for his shirts, if only, you know, he wrote the lyrics, was a tall, leggy blonde, and dated Harry Styles.

So what do you think? Kinda crazy? Or does this guy have a point? Read on to see the photos and refresh you memory on that video, then tell us your opinion in the poll ahead.ÊÊÊ