DREW OXLEY’S T-SHIRTS HELP FREE SEX SLAVES IN INDIA; WHAT CAN YOUR SHIRT DO?

By LIZ MCEWAN from soapboxmedia.com

Drew and Carolyn Oxley and son Niles, part of the next generation of dreamers 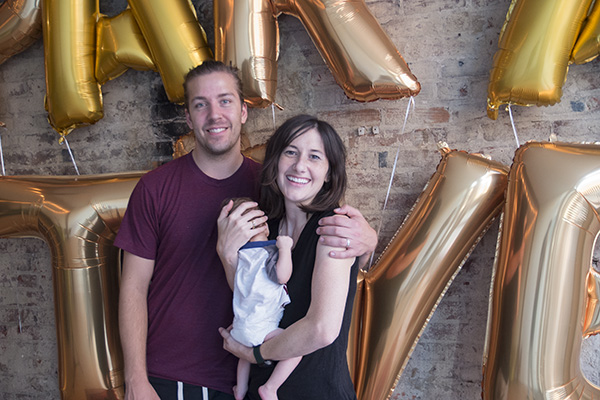 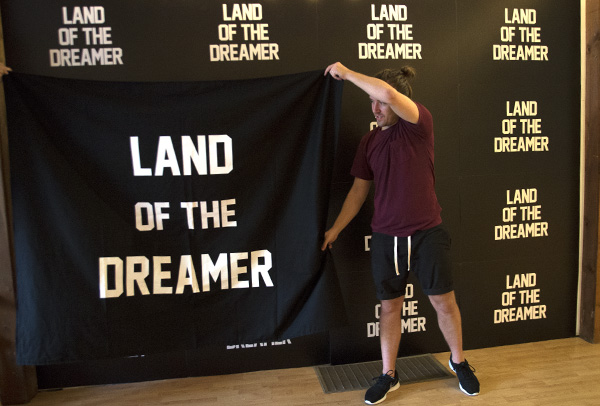 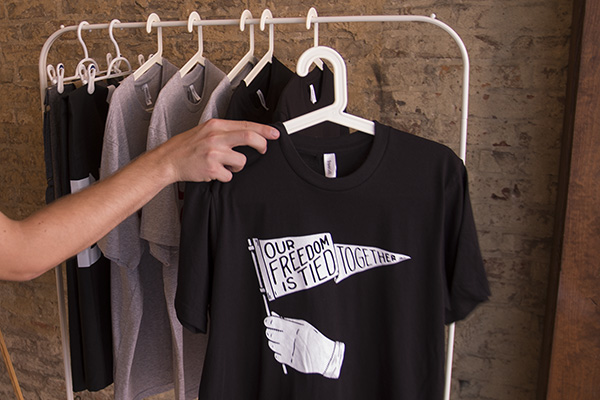 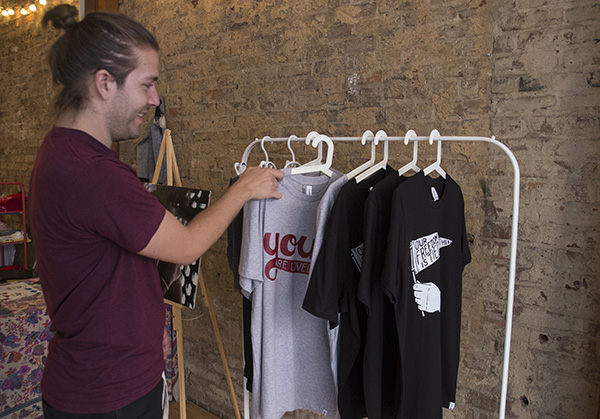 Photos by SCOTT BESELER
Most T-shirts seem so ordinary.

Drew Oxley’s shirts, however, are no ordinary T-shirts. He’s using them to fund a campaign to rescue and employ women halfway across the world and has built his company, The Parative Project, on his belief in the power of a shirt.

He’s betting that you’ll buy into his vision, too.

”Land of the Dreamer”

Drew Oxley is from a rural area 30 miles south of Columbus. As a child, he attended a ”farm school” and spent his free time in the fresh air and open fields of his all-American town.

He had always imagined that other kids’ lives were similar to his, but college proved him naive. When he arrived at the University of Cincinnati in 2006 to study communications, it was an exercise in ”re-learning people,” he says.

The college experience was proof that most kids came from worlds very different from his own, some more and some less. One of his biggest paradigm shifts came when he first learned about human trafficking.

Oxley was already familiar with the Invisible Children campaign – its goal is to expose and end the enslavement of child soldiers by the Lord’s Resistance Army in central Africa. After educating himself about issues of trafficking worldwide, he understood that trafficking is a global issue and is certainly not limited to captive child soldiers.

”Home of the Brave”

Through his involvement with CRU, a Christian ministry on campus, Oxley met Ryan Berg, who was developing his own nonprofit. The Aruna Project plans and executes 5k runs across the country to raise awareness of and funds for trafficked women in India. It also operates on the ground in India rescuing and rehabilitating women trapped in brothels.

Berg had seen the realities of trafficking first-hand and brought the issue to light for Oxley.

”I first heard of it on a CNN ticker line making reference to 12 minors being rescued,” Berg remembers. ”Shortly after that I was in India and stepped into a brothel in one of the largest red light areas in South Asia. I was undone with what I saw and heard and knew I needed to offer what I could, as little or as great as it might be. ”

Oxley remembers one trafficking statistic above the others.

That was all Oxley needed to hear. Memories of his safe and carefree childhood came back to him, and he just couldn’t imagine a child not be afforded the same freedoms. And he couldn’t imagine an entire generation of his peers being unaware of the atrocities children experience both locally and across the globe.

Similar to Berg’s epiphany, Oxley knew he had to do something.

This is where the T-shirts come in.

Oxley was involved in the shirt business throughout high school and college, mostly to help promote his friends’ bands. His wife, Carolyn, testifies that his collection of vintage and unique T-shirts is so impressive that he’s often stopped on the street and asked about the one he’s wearing.

So the idea of a T-shirt as a walking billboard was old news to him. But the issue of human trafficking was new news and something he felt needed a new PR strategy.

Oxley’s belief in the power of communication – via something as simple as a T-shirt – is so strong that he changed his business model. His shirt designs went from promoting bands to promoting a cause.

The shirts began to carry simple messages meant to spark conversations between the wearer and viewer. One of the first designs said, appropriately and simply, ”Every eight minutes.”

One of Parative’s marketing strategies is for Oxley to curate, rather then create, much of the creative content on the company’s website and social media. Many of the promotional images come from customers who have bought into the vision of Parative and submit photos of themselves spreading the message. Oxley likes it this way. It one of the ways his products move from the act of consumption to one of participation.

Parative has always been a small operation with a broad reach. It’s a place you can feel good about buying your shirt, and idealistic young adults have shown interest.

The company is generously named online on lists of ”conscious” clothing companies such as “buy-one-give-one” shoemaker Toms. It’s a message that a mission-driven generation can get behind.

Carolyn Oxley is Parative’s defacto support staff. She was privy to his dream for the company and supportive from the day they met three years ago.

When they met, she says, ”he had just started working on (the business) again. I remember him talking about it when we first met like it was his sweet idea baby. You could always tell it was something that was near and dear to him when he would talk about it. Or we would be driving and he would all of the sudden have a new design idea.”

Since Carolyn married into the Parative Project almost two years ago, her supporting role in the business has now grown well beyond being her husband’s favorite T-shirt model.

”I am gifted administratively and Drew is the dreamer of our family,” she says. ”We both make Post Office runs to deliver shipments, but my specific role is the list maker and administrative type things. ”_ I also think every entrepreneur needs someone to be their hype person and when it’s hard or scary to tell them that what they are doing is awesome, so that’s my favorite role at Parative.”

Beyond using his T-shirt designs to promote public awareness, Oxley wanted to support efforts already in the works worldwide. To this end he began donating some of Parative Project’s sales proceeds to The International Justice Mission, a nonprofit that protects the poor in developing countries from injustice and oppression, including those forced into sex trades.

But Oxley is a dreamer, and his dream for The Parative Project was always bigger than just donating a portion of his profits. A little while ago, he got back in touch with Berg from the Aruna Project about how they could partner together to make a greater impact in the fight against trafficking in India.

A plan is now in place for The Parative Project to move its production to India and provide employment for some of the women the project has worked to free and rehabilitate. Women employed by the Aruna Project will be making bags; women employed through another organization called Freeset will be making the T-shirts and flags. For the next few weeks, The Parative Project is raising money via aKickstarter campaign to finalize this production shift and solidify the relationship between Parative, Freeset and The Aruna Project.

”A key aspect in our effort in bringing and sustaining freedom is employing the women who have been freed from the brothels,” Berg explains. ”However this partnership unfolds, it will always serve as a means to the end goal of woman after woman no longer experiencing such harsh brutality but finding new life marked by love, care and reaching back in to help others still in such great need.”

Oxley’s dream for The Parative Project doesn’t end with a successful Kickstarter campaign. The vision doesn’t even end with human trafficking.

Looking into the future, he hopes to venture into kids clothing to fund education initiatives in India and also into shirts with messages meant for a different audience. One of the new designs reads ”You are loved,” a message not intended for the U.S. customer or viewer but for the women making the shirts in India. He hopes they understand that, on the other end of this purchase, someone cares about them.

He also hopes Parative becomes a catalyst for other entrepreneurs to launch their own ideas for changing the world.

”I see myself as an underdog person,” Oxley says. ”People don’t even give you the time of day until you’re somebody. So (I want to) be a place for people who don’t have a huge platform and to give them a spot where they can share their dreams.”

He gives an example of someone who wants to be an auto mechanic but opens their shop every week for free service and free training in their trade. People like this, he says, are worth the time no one else is giving them. He calls them ”everyday dreamers,” and he is definitely one of them.

But Oxley isn’t an auto mechanic. He is into T-shirts. And he believes that the shirt you wear says something, whether intentionally or not. So, then, why not choose a shirt that says something worth saying?

Oxley believes that a simple shirt can change the world.

”Dream bigger,” one of his shirts says. Another says, ”Spread your wings.” The shirt created for the Kickstarter campaign speaks most clearly the mission and vision of The Parative Project: ”Our Freedom Is Tied Together.”

Go here to learn more about The Parative Project and to support its campaign to move production to India. The Kickstarter campaign ends on Aug. 29.