Donald Trump threatens to sue over StopTrump.us T-shirts – but he doesn’t have a case 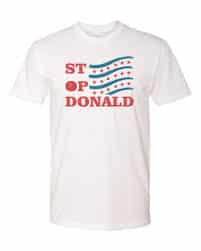 By Eugene Volokh from washingtonpost.com
Huffington Post (Igor Bobic & Cristian Farias) has the story, with a link to yesterday’s cease-and-desist letter:

The presidential campaign of Donald Trump on Tuesday threatened legal action against a politically oriented clothing outlet for using the GOP front-runner’s name, which is trademarked, in its domain name and merchandise.

StopTrump.us sells t-shirts and other apparel online ”as a way to creatively respond to the attacks from Donald Trump to immigrants from Mexico and Latin America.” Its merchandise features Trump’s name and face along with slogans such as ”Donald Is Dumb,” ”Stop Trump” and ”America Is Already Great.” The Boston-based website, which describes itself as a ”social enterprise,” donates a portion of its profits to select charities, including the Hispanic Scholarship Fund.

But Trump doesn’t have a case here. Political criticism of this sort – even political criticism that’s sold for money – isn’t covered by trademark law, even when the subject’s name is a valid trademark (because it has been used for commercial purposes, or even registered as a trademark). Nor would it be covered by the so-called ”right of publicity,” which in most states limits certain uses of a person’s name or likeness; and to the extent that any right of publicity statute or trademark rule would try to restrict such criticism, the First Amendment protects the criticism.

There are three basic trademark law theories that are potentially in play here.

1. Trademark confusion: The federal trademark statute bars uses of a trademark that are ”likely to cause confusion” as to who is selling a work. If I sell T-shirts with Justin Bieber’s name on them, he could sue me on the grounds that buyers might think the shirts are authorized by Bieber. But no reasonable person would assume that ”StopTrump” T-shirts are authorized by Trump himself.

2. Trademark dilution: The statute bans even non-confusing uses of trademarks that tend to dilute a sufficiently famous mark. The classic example is Godiva dog biscuits, which may dilute the distinctiveness of the trademark ”Godiva” as a mark for luxury goods, even if no one thinks the dog biscuits are made by Godiva. But the dilution provision expressly exempts uses of a trademark for ”identifying and parodying, criticizing, or commenting upon the famous mark owner or the goods or services of the famous mark owner.”

3. Trademark cybersquatting: The statute also bans certain uses of trademarks in domain names. But it’s limited to uses of trademarks that are likely to confuse people about whether the site is endorsed by the trademark owner, or likely to dilute the trademark – for reasons given above, that element can’t be shown here. And in any event, the cybersquatting law excludes cases where ”the person believed and had reasonable grounds to believe that the use of the domain name was a fair use.” Criticism is a classic example of fair use.

Trump’s letter relies on the confusion and cybersquatting theories; but even if a lawsuit is brought on all these theories, it would lose. There are lots of cases on all this, such as Mattel, Inc. v. MCA Records, Inc. (9th Cir. 2002), which held that a band’s commercial release of the song ”Barbie Girl” – which criticized Barbie – didn’t infringe Mattel’s trademark. But in any event, both the statute and the case law under it are quite clearly against Trump.

Of course, such cease and desist letters often frighten defendants into submission, since they may be reluctant to spend money on lawyers even if they will win in the end. But here, I’m pretty sure that the StopTrump people will get many offers of free legal help; and the lawsuit is pure publicity gold for the business. What a brilliant marketing tactic by the T-shirt people – but why is the Trump campaign playing along?
About: Eugene Volokh teaches free speech law, religious freedom law, church-state relations law, a First Amendment Amicus Brief Clinic, and tort law, at UCLA School of Law, where he has also often taught copyright law, criminal law, and a seminar on firearms regulation policy.ÊÊÊ