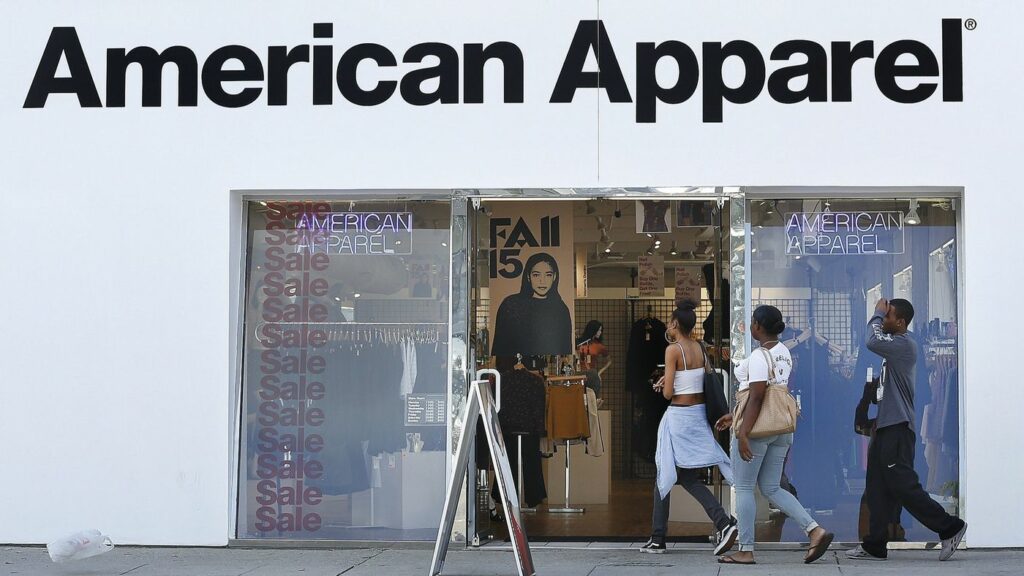 BY ALLISON COLLINS from themiddlemarket.com

With a mult-million dollar interest payment due in October, the company is working on a turnaround while fending off lawsuits from founder Dov Charney.

With an interest payment due in October, rumors are swirling that All-American retailer American Apparel Inc. (NYSE: APP) may wind up filing for bankruptcy. But despite a series of Chapter 11 whispers over the years, the apparel retailer has always been able to sidestep a filing.

Back in 2011, reports swirled that the company would file for bankruptcy after it said it might have to in a filing with the U.S. Securities and Exchange Commission.

American Apparel needs to pay at least $13.9 million in interest on notes it issued in 2013 on Oct. 15, according to SEC filings. Before its previous bi-annual payment, it borrowed $15 million from New York hedge fund Standard General. Reports suggest the company will struggle to make the upcoming payment, which could lead to default, and potentially a bankruptcy filing. American Apparel did not return Mergers & Acquisitions’ request for comment.

Before the rumors, American Apparel said that it had enough money to operate for the next 12 months, based on financials from the first quarter filed with the SEC on May 11.

With the payment on the horizon, the company is also fending off more than 20 lawsuits from ousted founder Dov Charney, and attempting a turnaround to boost profitability. Part of that plan includes closing stores (as of Dec. 31 American Apparel had 224 locations) and altering its apparel lineup (the brand is known for spandex-everything and overtly sexual advertisements).

In July, American Apparel announced it was taking the next step in the turnaround – implementing $30 million in cost-cutting initiatives, including closing under performing stores and laying off employees.

The company expects the strategic turnaround plan to take years, and span brand-building to speed-to-market to e-commerce. In July, American Apparel amended leases for two LA buildings, bringing costs down from almost $3 million to $1.8 million. That deal comes with the plan to vacate one of the buildings by March 31.

Financially, the business’ problems stretch beyond the next interest payment. American Apparel experienced a net loss of $25.4 million in the first quarter of 2015, compared with a net loss of $5.4 million for the same quarter in 2014.

The company has been operating with the help of a $50 million asset-backed revolving credit facility from Capital One Business Credit Corp., which it amended for the sixth time in March.

The latest amendment waives defaults that would result if American Apparel exceeded the allowed maximum leverage ratio and let the business to take the $15 million loan from Standard General. That unsecured loan from the hedge fund carries a 14 percent interest rate and matures on Oct. 15, 2020.

Standard General is considering buying American Apparel’s debt from Capital One, SEC filings show, which it says it would do by Sept. 30. As of March 31, American Apparel owed Capital One about $35 million on the $50 million revolver.

Charney, who started the apparel line in 1989, has been slamming his brainchild with lawsuits. In July, he’d filed more than 20 suits. He was removed from his post for the first time in June 2014, and then more permanently in December, amid allegations of sexual misconduct. During that time frame, Standard General bought a significant amount of American Apparel shares. Charney handed over his voting power to the hedge fund, which agreed to have an internal review of his conduct. That review, which led to Charney’s termination, was conducted during the same time the company was fielding a buyout offer from New York private equity firm Irving Place Capital.

American Apparel has repeatedly stated it believes Charney’s claims are without merit. But even so, lawsuits can get expensive. (From his end, Charney filed another suit asking American Apparel for an advancement of fees and expenses he incurs while he sues the business.)