About 200 workers were suspended for refusing to remove the shirts.

by David Kravets – from arstechnica.com 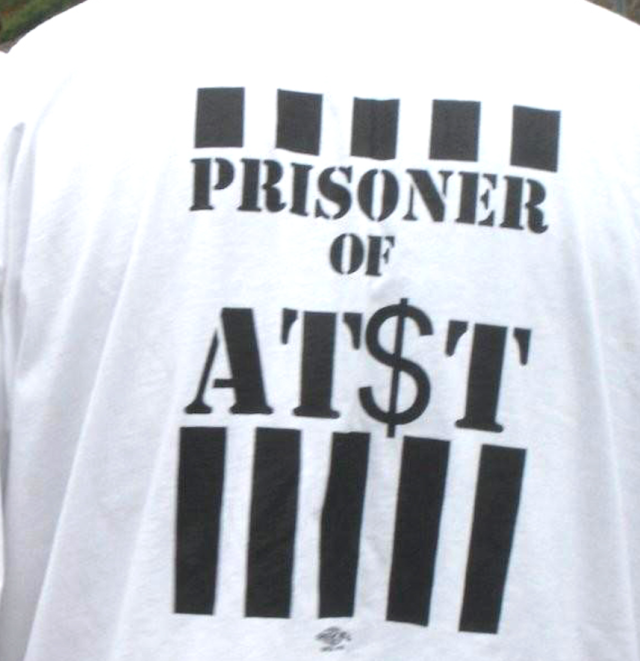 A federal appeals court has ruled that AT&T may prohibit its unionized field technicians from wearing white T-shirts with black stripes displaying the phrase “Prisoner of AT$T.”

The workers, based in Connecticut, were in a labor dispute in 2009 and wore the shirts to protest increasing healthcare costs. About 200 workers were suspended for refusing to remove the shirts. The National Labor Relations Board (NLRB) had sided with the technicians from the Communications Workers of America in 2011, but a federal appeals court set aside that decision Friday.

According to the Friday ruling by the US Court of Appeals for the District of Columbia Circuit:

AT&T Connecticut banned employees who interact with customers or work in public-including employees who enter customers’ homes-from wearing union shirts that said “Inmate” on the front and “Prisoner of AT$T” on the back. Seems reasonable. No company, at least one that is interested in keeping its customers, presumably wants its employees walking into people’s homes wearing shirts that say “Inmate” and ”Prisoner.” But the NLRB ruled in a 2-1 decision that AT&T committed an unfair labor practice by barring its employees from wearing those shirts. Section 7 of the National Labor Relations Act protects the right of employees to wear union apparel at work. But under this Court’s precedent and Board decisions, there is a “special circumstances” exception to that general rule: A company may lawfully prohibit its employees from displaying messages on the job that the company reasonably believes may harm its relationship with its customers or its public image. Put simply, it was reasonable for AT&T to believe that the “Inmate/Prisoner” shirts may harm AT&T’s relationship with its customers or its public image. Therefore, AT&T lawfully prohibited its employees here from wearing the shirt.