A Twitterbot Is Churning Out Ironic Hipster T-Shirts

By Rob Walker from yahoo.com/tech

Maybe designing a trendy, ironic hipster T-shirt is hard to do.

On the other hand ”_ maybe a bot could do it.

The tech-experimenting artist who calls himself Shardcore has taken the latter approach with an algorithm-design project he’s named @hipsterbait1. The bot has evidently fully automated the process of cranking out T-shirts ”for the post-post-ironic hipster,” spinning out its results on Twitter and Tumblr. 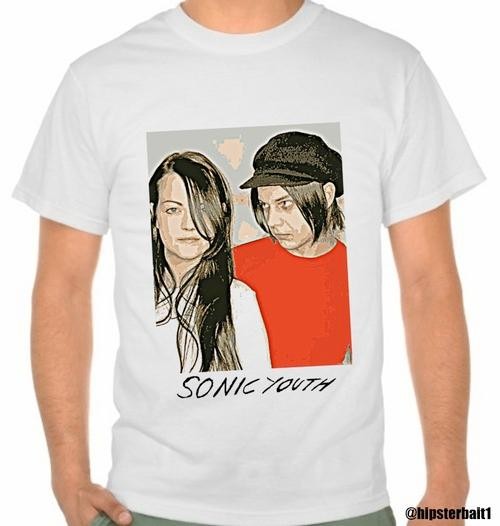 Purposefully mismatching cultural references is already, as an explanatory post explains, an existing meme. The example cited: A T-shirt image that popped up when Lou Reed passed away, juxtaposing Reed’s name and an image of Iggy Pop, promptly went viral in certain hipster quarters.

”It’s delightful,” Shardcore writes, ”because it allows us a moment of smugness as we recognise the ‘mistake’ being made. We wear this pun on a t-shirt as a form of social signaling – ‘Look at this joke I’ve recognised, do you recognise it as well?’ – it allows us to show a particular aspect of our taste to strangers, displaying a glimpse of our inner mental life to the world at large.”

So how hard would it be to simply automate this process? That is evidently what Shardcore has set out to discover, with a system that hands the mismatching process over to algorithms. ”The entire process is automated,” he writes. ”I have no control over the juxtapositions it makes.”

Maybe so, but presumably the focus on delivering a specific form of punchline/payoff narrows the parameters in a good way: Remember Solid Gold Bomb? The enterprising T-shirt business conducted a more free-form experiment in algorithmic slogan-generation last year, attempting to churn out those omnipresent ”Keep Calm and _____” shirts at random. Somehow, the algorithm ended up spewing out a few outright offensive phrases, such as ”Keep Calm and Rape Me,” on tees sold via Amazon.com.

An uproar ensued; the enterprise swiftly went out of business.

In any case, @hipsterbait1’s creations are shared on Twitter and Tumblr– and the idea was that they could exist in the physical world as well: A baited hipster, ironic, or merely post customer could click and buy any of the designs as they emerged.

Sadly, Zazzle has evidently thwarted this option for the moment, evidently for predictable copyright-related reasons.

Maybe it doesn’t matter. ”You don’t need to actually own the t-shirt to share the joke,” Shardcore cheerfully admitted in announcing the project. ”The image fulfills much the same function in the ‘online’ world as the actual t-shirt does in the ‘offline’ world.”

Agreed. The images are amusing, but I’d rather reblog one than actually wear it.

Write to me at rwalkeryn@yahoo.com or find me on Twitter,@notrobwalker. RSS lover? Paste this URL into your reader of choice:https://www.yahoo.com/tech/author/rob-walker/rss.