9 AWESOME T-SHIRTS EVERY GAMER SHOULD OWN 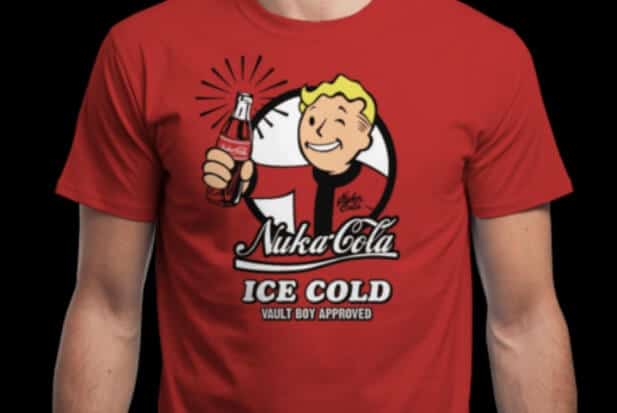 If there’s one thing all gamers have in common, it’s a passionate love for sharing inside jokes and references with other gamers, and fun T-shirts offer a host of possibilities for that.

These items of clothing pay perfect homage to the idiosyncrasies and memories that every self-respecting video game player shares.

Some are funny, some are clever, and some just look great. If you’re wanting a shirt that celebrates gaming, we suggest one of these.

How annoying is it when you’re out and about, and all of a sudden, you need access to Eevee’s evolutionary tree as you can’t quite remember how to spell Espeon?

Well, with this Pokemon saluting T-shirt, that definitely-regular problem will be a thing of the past. This shirt will set you back around Ìâ£10, plus shipping, but it’s worth it to constantly prove to people that you know every single evolution off by heart.

Yes, Yoshi is the cat. This cool design puts ‘Don’ Mario at the helm of the Italian criminal underworld, with Luigi and Peach at his side.

I can’t help but think that Mario’s schemes would be slightly more off-the-wall than Vito Corleone’s. A raid of a mushroom factory, monopolization of the fire-flower market, putting a hit out on Toad because he hasn’t paid his share of the rent in time.

It could get really vicious, with Mario running things.

If you don’t get the joke, you need to get better at Mario Kart. As players will know all too well, the blue shell is a usable item in the series that players lagging behind in the race receive from boxes.

The shell instantly flies to whoever is in first place, and explodes, thus setting the winning payer back valuable seconds. It’s the most evil and aggravating thing ever added to racing games.

Wear this shirt in defiance of the blue shell, and laugh in the face of all those who would dare to try and take your golden trophy away from you. Just try not to annoy your fellow competitors too much; you don’t want a Bullet Bill on your back.

You’ve got to admit, it is a really strange pose for Snorlax to be pulling. This is the Pokemon’s sprite from the Gameboy Colour game Pokemon Red, and I’ve deduced that he’s either posing to be drawn or farting.

Whatever the reason, it has lead to a fantastic parody in the gaming community.

This shirt is available for Ìâ£16, and for that price, it’s a steal. You can’t put a price on old school comedy.

Arrow to the knee

One of the biggest and most widespread gaming jokes of all time comes from The Elder Scrolls V: Skyrim, but I don’t need to tell you that.

What you might not know is that ”taking an arrow to the knee” is actually old Scandinavian slang for ”getting married”. It refers to going down on one knee to propose, which resembles being shot in the knee by an arrow. So when the guards in Skyrim say: ”I used to be an adventurer like you, but then I took an arrow to the knee”, they mean that they got married.

Sorry to ruin the joke. The shirt’s still cool though.

Now this is cool. What we have here is all the different forms of material used in the Minecraft universe compiled into periodic table form, which I think you’ll agree is very satisfying to see.

The images were taken from the Beta version of the game however, so while this shirt is awesome, imagine how much more awesomer (incorrect grammar to emphasise how awesome) it would be if someone made a modern version with all the new blocks added.

There’s nothing wrong with a bit of shameless holiday destination advertising, though I doubt a vacation in the underwater city of Rapture would get many stars on Trip Advisor.

In the video game BioShock, Rapture is a dystopian habitat deep under the Atlantic Ocean, and houses a number of psychopathic murderers and genetically altered children. Not exactly Cornwall caravan park is it?

We all know retro gaming is the best kind of gaming, and this SNES shirt will help you communicate your enjoyment of 16-bit adventures so much easier.

Remember Street Fighter II? Not everyone does, so remind them with this logo printed on your chest. Do not, I repeat, do not wear this shirt if you’ve never played the SNES. There’s nothing worse than when people subtly indicate they’re a fan of something they know nothing about.

Do T-shirts get sweeter than this? Just in case you’ve been living in a vault for the last 20 years, this shirt is a reference to the Nuka Cola drinks found throughout the Fallout world.

It’s the cool Fallout catoony commercial style that I like, and Vault Boy’s signature wink is enough to catch anybody’s eye.

This could be a perfect choice of attire for your inevitable Fallout 4 binge session, which has become more and more of an accepted truth among the gaming community of late.