This shirt by DGK Clothing depicts two Styrofoam cups which appear to contain “Purple Drank,” a popular recreational drug combining cough syrup, promethazine and soda. The shirt was used as one of the examples of “drug clothing” in popular culture. (Jay Scott Smith | MLive.com)

EAST LANSING – Jermaine Calloway has toured the country warning police organizations of what to look for when trying to spot illegal drugs on motorists, all the way down to the clothes they wear.

“Nothing in the drug world happens without a reason,” Calloway, a Boise, Idaho police officer since 1997, said on Tuesday at the 19th Annual Michigan Traffic Safety Summit. Police organizations from all over the state are meeting at the Kellogg Center at Michigan State University to go over a number of law enforcement and traffic safety matters – including spotting motorists driving while high on drugs.

Calloway, who has worked on Boise’s DUI task force and has worked as a field training officer, often goes to head shops – stores that are known to sell such items as pipes, bongs, rolling papers, and other paraphernalia associated with drug use. He often enters the stores in civilian clothing, gives an alias, and strikes up a conversation.

“When you talk drug clothing lines, there’s probably about 10 that are really popular across the country and there’s another five or six that flirt with it,” he said. “Many times, understanding logo identification will take you so many good places.” 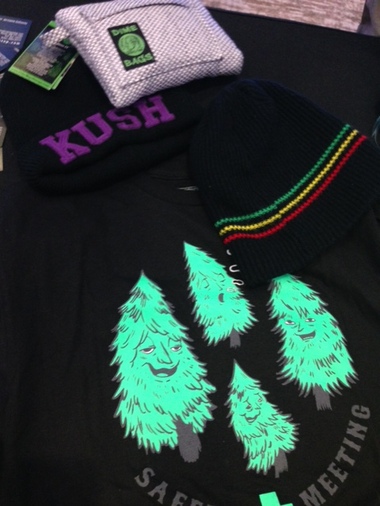 Not all drug-related clothes are as obvious as these. Some are as subtle as a small logo on a hat or a hidden pouch in a pair of shorts.Jay Scott Smith | MLive.com

He named four brands to watch for:

”¢ Aperture brand has “stash spots” that are inside the sweat bands of some of the company’s hats. “Not all of the brand’s hats have a stash compartment but this specific hat does. Once you bend that beanie back, there’s a nice little stash compartment there on the right side.”

”¢ DGK Clothing started in 2003 and stands for “Dirty Ghetto Kids,” is extremely popular among skateboarders and the stoner community, openly promoting drug usage on some of their brand’s clothing. “You see the two Styrofoam cups,” which point to cough syrup abuse, usually with the combination of codeine and promethazine. It’s often called “syrup,” “purple,” or “purple drank.”

”¢ Seedless and SRH produce shirts and pants that aren’t as blunt as DGK, so officers have to look out for subtle hints. “Many of the other lines will say that we’re about extreme sports, or motocross, or surfing. With Seedless, they’re pretty much about getting high.”

Seedless sells shorts with sewn in pouches that Calloway said can be used to hide drugs and other contraband including weapons. “You could put a small gun in there, razor blades, handcuff keys, or your dope,” he said. “It’s made to stash whatever your valuables are.”